The French presents us with the racing version of the Coupé the second place of the 24 hours of the Nürburgring 2016 in the 1:18 format. 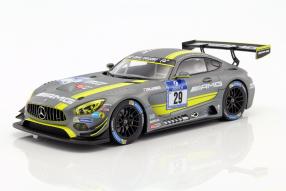 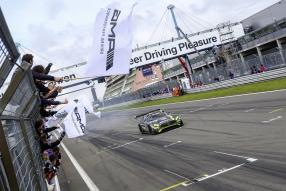 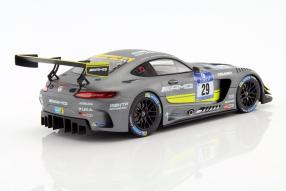 Fans of our blog know that we are fundamentally speak positivley about the models of the Mercedes-AMG GT3 from the production of the French label Norev. This is due to the excellent craftsmanship that the team from Vaulx-en-Vaulin has placed on this car on the shelves. With the model car after the model of the team AMG team HTP-Motorsport, Norev once again proves to have also found in the segment of decorations miniatures from the motor sport the connection to the worlds top of the model builders. Norev has a very good model that meets exactly the look and feel of his model, has many details, and here as a commercial model in Mercedes-Benz packaging and the benchmark, with the deployment car of the drivers Christian Vietoris, Marco Seefried, Christian Hohenadel and Renger van der Zande 1:18 debut.

Vietoris, Seefried, Hohenadel and Van der Zande, finished the 44th edition of the 24 Hours from the Nürburgring after 134 rounds and exactly 24: 07: 52.197 hours. With an average speed of 182.799 kilometers per hour, they took their fastest lap with 8: 19.788 minutes; Just before race, by the way, in lap 123. Overall, it was a really spectacular finish, because four Mercedes-AMG GT3 ran into the first four places: Historically! The final two rounds were a highlight: after a Splash Dash fuel stop just a few minutes before the end of the 24-hour-distance, the final driver, Hohenadel, kept close to the lead in front of Engel in the competing car of Black Falcon. With a last minute overtaking maneuver, Engel conquered the top and made the victory for Black Falcon with a distance of 5,697 seconds.


This was the narrowest finish in the history of the 24 hour race. "In the end, we lost the 24-hour race in the last round, but basically, we all won - especially Mercedes-AMG, who built a great vehicle "The team has also won the Mercedes AMG GT3," he said. "It's a very tough race," he said. The goal of having a good model built was achieved by Norev. Left in the picture and at the top of the video you can see the model. This year's ADAC Zurich 24h race will take place from 25 to 28 May 2017, the 45th edition.