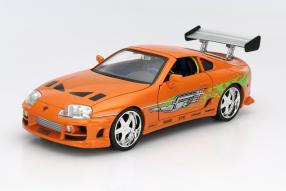 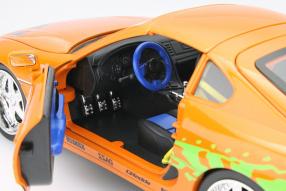 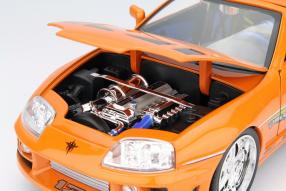 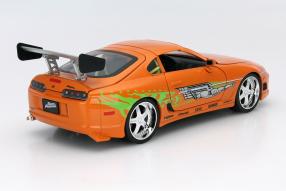 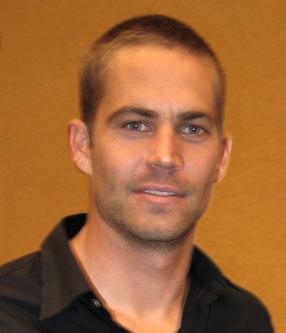 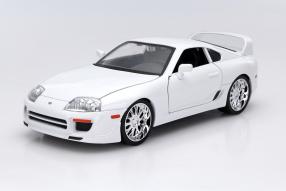 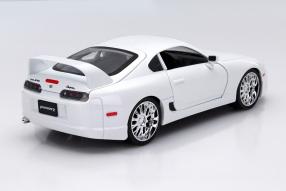 It is weekend. The month of May is imminent. And the mercury in the thermometer loses height like a sports car loses speed after the driver has pressed on the brake pedal as in an action movie. Our recommendation: If you have not just subscribed to one of the online film archives you investigated on free-range or the nearest video store, the movies about the adventures of Dominic Toretto and Brian O'Conner who since theatrical release of "The Fast and the Furious "care in 2001 for a lot of power and action on screens and screens of all kinds. With "Furious 7", the series ended in 2015 - at least for now. With the two models of the Toyota Supra, which we present to you here and now closer Jadatoys recalled in a special way to the US actor Paul Walker.

Paul Walker and his Toyota Supra

Paul Walker played in the famous movies the undercover policeman Brian O'Conner, which dips into the world of illicit street racing and determined the associated crimes. Walker died at the age of 40 years due to an accident with a private Porsche Carrera GT; the middle of the period of ongoing filming the 7th part of the action series. Using computers and his brothers "Furious 7" was completed. The label Jadatoys reminds the models for Toyota Supra model JZA80 1:18 to cars that Walker drove in the first and last film. The Japanese sports car was built in the years 1993 to 2002 was the most recent, fourth edition of up to 243 kW / 330 bhp two-door coupes.

The vehicle is therefore referred to as Mk. IV, was built as a coupe as well as Targa with a removable roof midsection and took its power from a 3.0-liter six-cylinder in-line engine. The orange model car Jadatoys reduced the model, with the Brian O'Conner has traveled in the first part of the film series. Highlights from this we found out the following video, we have you embedded earlier in this article. The model shows the famous model from the screen with all the relevant decorations, has to open doors and hoods and is not too expensive for the price of EUR 44.95. Also, the Targa roof can take out of the collector.

Spoiler surcharge for all

The interior is well modeled authentic, as with many chrome parts - typical of the tuning scene - garnished engine compartment. The line from the nitrous oxide tank in the rear is also to understand how Jadatoys has also implemented the blue and black running seating landscape. Certainly the model car is not a paragon of detail joy such as a 1: 18er from Kyosho, but it turns with probability bordering on certainty any fan of the film series and / or Paul Walker satisfied. The elaborate Bespoilerung incidentally, was something that could order any Supra-driver surcharge. The proportions of the model exactly match those of the prototype; the gap dimensions are generous, but not too big. The model is therefore dismissed with a score of 2 out of our check.

A tear in the eye, we can not help us in the face of white Supra. He was driven by Brian last film of the franchise. We quote: "In Monte Cristi, Dominican Republic, the whole family gets together on the beach, where Dom, Letty, Tej, Ramsey and Roman watch Brian play with Mia and Jack on the beach together the friends becomes clear that Brian's focus. now lies solely with his family. Dom decides to let the three alone and continues. However, he is overtaken by happy Brian in a white Toyota Supra. Both drive incidentally, this is Dom recalls the time with Brian, with brief excerpts are shown from all previous parts with Brian. "

Take the family and watch the movie

And: "After a while, finally go their separate ways at a bifurcation, where Brian goes counter to the sun." A goodbye forever. A swallowing while writing this paragraph. Have a good trip, Paul, wherever you are now. This white Toyota Supra is therefore a very special model car that meets all demands of us otherwise provided and the same marks obtained, as the orange squad cars. In February 2016 Vin Diesel was the start dates for the parts 8 to 10 known to appear respectively in April 2017 April 2019 and April 2021st Our final piece of advice therefore for a scaly, rough and first weekend of May: you Take your family and looking together the 7 movies. And if you are attentive, you may listen to the two Supra with the tires scrape.

We wish you a nice weekend. Next week will start with many newcomers. All the best!

[28.04.2016] Spark is reminiscent of a technical highlight from Stuttgart