Schuco fills a very special hole in the collecters showcase with this 1:18 model made of resin-plastic. 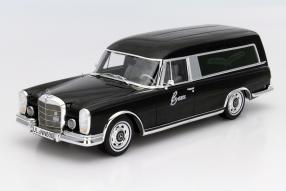 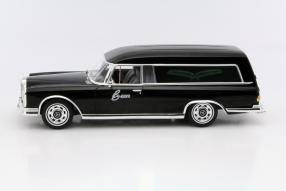 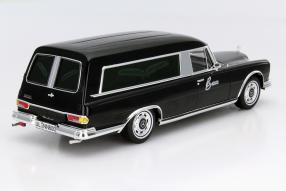 Yes, sometimes the blogger is speechless; when one or the other protypes for model cars can take your voice away. So also in the case of the Mercedes-Benz 600, the Schuco remodels the hearse and brings in trade in 1:18 scale. For 219.95 euros, the collector gets under article number 450 007 600, a model car that acts macabre, but is bound to find his friends. One thing is clear: the finish that the Fürth have the built resine plastic model car inflict upon is simply overwhelming. The pieces fit together perfectly, the look of the headlights and the chrome bumpers recall a bygone era. Classy addition, as in a 600 W 100 series, you can not be laid to rest.

And as it so is, you always look back at a tomb. Let us therefore reminisce the key data for W 100. The 600 appeared at the IAA in 1963 and was ultimately constructed as the sum of the technically feasible. Early on it was clear that Mercedes-Benz would never make any money with the luxury car, but for the carmaker was compensated with an enormous increase in Image: stars like Udo Jürgens, actors and politicians, rulers and kings sat on the equipped with an eight-cylinder luxury cars , The power set took 184 kW / 250 hp from 6.3 liters capacity. At least 5.54 meters measures the car in length; the long wheelbase version and the Pullman version even 6.24 meters.

429 Of the 2,677 vehicles built were a Pullman or six-door and 59 the so-called Landaulets; as such refers to the limousine with a fixed roof above the front driver and a convertible folding roof to the rear. The passengers of the model to our Model car probably need no more windows. Schuco has produced mainly with their details in the cab fascinating miniature in the series Pro.R18 and leads the model under the name Pollmann 600 in the list of its products. As usual with the car models from the Poyurethan casting resin Resin remain closed doors and hoods. "The production of this material even more intricate details with almost the same weight model can be represented as in a production of metal", so Schuco.