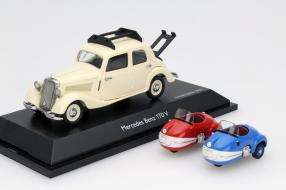 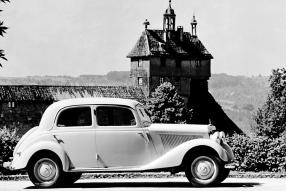 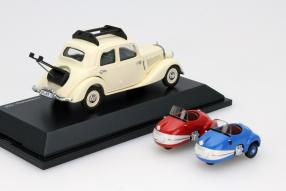 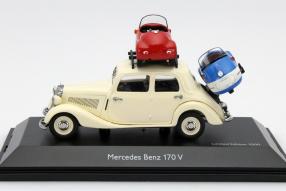 Do you know anything about the name Brütsch? We asked a few nice people and always got the same answer: No. It is now being expected for quite some time ago that the entrepreneur Egon Brütsch has operated as a manufacturer of microcars. The brand launched in 1951 to build the knutschkugelig acting Transportation. Schuco but has recalled and brought to the set the item number 450227000 a beautiful to seeing available on the market, which traces a contemporary image as it was once seen on the streets: a Mercedes-Benz 170 V supplies 2 vehicles Brütsch Mopetta from, in which the little Benz takes just piggyback. Good old days: Can you imagine that a S-class charging 2 Smart and brings to the customer?

What exactly was Brütsch for a company?

Whether supported by the pocket money of the father or with their own money, we do not know: Egon Brütsch lived from 1904 to 1988, was the son of a Stuttgart stocking manufacturer and practiced from 1929 to 1931 in the occupation of motorcycle and car racer from. In 1951 he got into the car business and started with the production of small cars with plastic bodies. he had the experience to do so because from 1935 to 1950 he went partly in self-built cars race. His first prototype heard the name hermit, 400 and dwarf. Imagine that you are asked in the club, "hey, what do you drive?" and you answer "a dwarf". Whether you as the perfect girl for the ride to the weekend would have to conquer? At that time certainly determined, because mobility was possible for many with only very small cars.

The first Brütsch possessed plastic bodies with single-ended two-cylinders, measured in length about 2 meters, and brought 100 kg on the scales. Already 3 seats had the Brütsch 200 Sparrow has to offer, which reached 90 kilometers per hour with its 200 cubic centimeter Fichtel & Sachs motor. The Brütsch dwarf was to have 1955 to 1957: The two-seater was similar motorized and was sold as under license in France under the name Avolette. The distribution in Germany was kept within manageable limits: 12 copies were sold. The Brütsch Mopetta was offered from 1956 to 1958 and came up with 14 pieces is not really in the realm of mass production. 5 of them will be of still preserved; First, we have discovered on Youtube.

More vehicles has since Mercedes-Benz sold 170 V, which is being misused here as vans downright: 71,973 copies found in sedan and Cabriolet their way to customers. The internal designation W 136 called 170 V debuted at the 26th International Automobile and Motorcycle Exhibition (IAMA) in Berlin in 1936, but has been built as a single pre-war model after WW2. Schuco has reduced the limited edition of 1,000 pieces model car lovingly detailed, very well made the appearance of the models and the earned milestones set in automobile thus a beautiful monument. And so collecting a piece is far from the teaching of history.