The french bring us an alluring model of the W 198, that could even get to the fans of opening doors 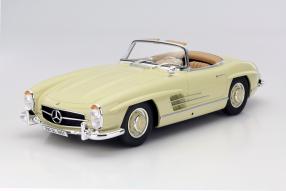 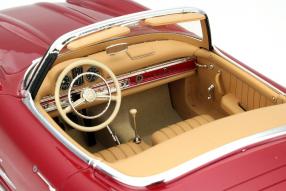 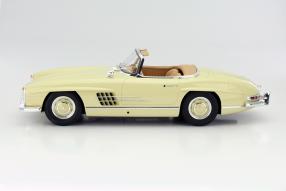 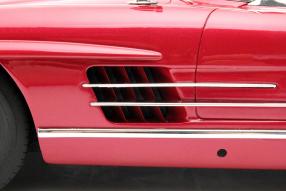 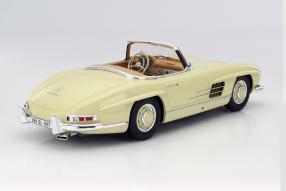 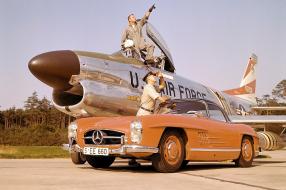 Granted - private represents this blogger setting that large model car must also offer many functional parts. On the other hand it is of course known that small series of some models are only economically viable if they are built resine plastic: "Reduced demands on the mold + lower production price = model is only feasible," so reads the bill. In the case of the Mercedes-Benz 300 SL, the Roadster with the internal designation W 198 II, to open doors and hoods are to get over, because the open roof guarantees each only desired form of insight. Okay, at the sight of the engine, the fans have to do without, but there is the 300 SL in a scale of 1:12 a fascinating Großmodell: A top model who today directs his successors to the courts.

62 years ago, Mercedes-Benz created a furore when the Stuttgart brand in February 1954, the "International Motor Sports Show" in New York the 300 SL of the W 198 series and a near-series prototypes of the 190 SL (W 121) presented. Experts and public were delighted by both the Gullwing coupe as well as of the little roadster. The mood was also transmitted to the 1957 presented 300 SL Roadster, the model to the model of the French GT-Spirit. From the original time 32,500 DM expensive sports car emerged to 1963 a total of 1,858 copies. Both, both Coupe and Roadster are among the models, of which almost every car model maker has eventually produced a model: For the sandbox as well as for the showcase.

Rather a jewel as a toy

For the latter category is certainly the large model expected in a scale of 1:12, which comes in strawberry red with the item number B66040627 about the accessories shops of the brand with the star in the trading and beige reduction, the GT-Spirit brings itself to the collector (GT030 ). Both models are made of resine plastic and offer the appearance an appearance that exceeds that of the legendary, by a 158 kW / 215 hp straight-six engine payable driven prototype exactly. While we did not get to see the 3.0-liter in the model, fascinated by the miniature with an outstanding quality of reproduction of many details: Highlights include the chrome frame around the rear lights, the passenger compartment and the windshield.

Much prototypical chromium forms GT Spirit by also on the dashboard and the steering wheel. The controls have the form engineers also meticulously retold. The Hupring as well as the slider of heating and interior mirrors are eye-catchers that contribute with their finish much to the positive evaluation for the 300 SL in 1:12. The miniature was also dedicated to the recreation of the interior much attention, which presents itself visually modeled somewhat sparsely furnished accordingly, which is due to the then state of the art and was thus implemented harmoniously by GT Spirit. Much more room than at smaller scales remain the form of farmers but at the retelling of special details: The side vents can be found as well done anywhere else.

High appreciation of the prototype

were processed Loving the reflectors of headlamps that conform perfectly to the body design of the polyurethane casting resin Resin. Round 38 centimeters measures the model car in length and is thus suitable as a decoration for the dining table or sideboard, which can stand on its own. The red version is slightly more expensive than the retailers Model: 279.95 Euro costs the advertising model, 209.95 euros, the specialized trade issue. Compared to the model that is vanishingly little, because for the 300 SL Roadster is the increase in value, according to the Historic Automobile Group International (HAGI) since 1980 at nearly 13 percent per year. In 2009, it is still forecasting 450,000 Euro purchase price for a W 198 II Roadster - 930,000 euros are now known to us on demand. So rather a 300 SL W 198 II buy the original, or rather a current Mercedes-AMG GT have the daily fun? And a S-class for everyday life? Well, this question can probably only members of the make "Mercedes-Benz 300 SL clubs", we present you the video of the DW. We then enjoy just only at sight of probably really most beautiful roadster ever built: 1999 chose the readers oldtimer magazine Motor Klassik the W 198 II "Sports Car of the Century".