With the model of Kyosho 1:43 scale open as the second year of our blog and at the same time introducing a masterfully-made miniature of Bentayga. 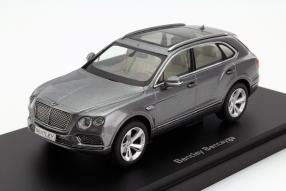 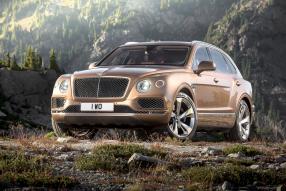 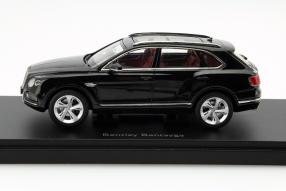 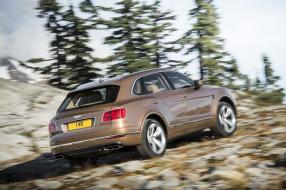 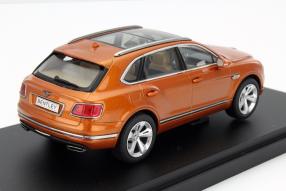 With what should a Happy New Year begin? From our perspective, a good new model car, what else? In this regard, our blog can rely on the help of Kyosho. The premium label has delivered shortly before the turn of the model car of the new Bentley Bentayga 1:43 that really present itself as strong as the best New Year's Eve Pops: gorgeous colors and impressive appearance. With the models in Moonbeam Grey Metallic, Back Crystal Metallic and the almost poppy Orange Flame Metallic now rolled out the probably the strongest, fastest, most luxurious and perhaps best SUV in the world in the showcases of collectors. We have looked at us and throw Suitable a look at the model.

By Bentayga the brand wants to accentuate and complement the series of their limousines Flying Spur and Mulsanne and the Continental coupe to an impressive from every angle SUVs. The Bentley Bentayga comes with 447 kW / 608 hp from a revised W12 with approximately 6.0 liters of displacement and 900 Nm fabled (Nm) maximum torque to its buyers. 2.4 tons this luxury car, brands like BMW or Mercedes-Benz can not match. The Bentayga is connected via an 8-speed automatic transmission from ZF. With its 308 hours kilometers tip the Bentley Bentayga the fastest SUV in the world. He accelerated, according to its manufacturer in 4.1 seconds from 0 to 100th

The 12.8 liters, which is the average consume the Bentley, are probably more theoretical nature, because that is the group of consisting of sheikhs and billionaires clientele is unlikely to be interested in who has who has. The Bentley Bentayga its world premiere at the IAA 2015. His platform comes from the Volkswagen Group and also serves as the big Porsche Cayenne and Audi Q7 as a basis. However, the Bentley Bentayga was based on an independent car that is not reminiscent of mass goods from Germany remotely. The characteristic become for the brand Bentley large inner round headlights and the light rings on the outside edges can be found at Bentayga well again, like the rich in tradition grille.

On the sides of the design team cites the lines of the Continental GT. Fats sills lend the Bentayga a seemingly unshakable acting strength and solidity in appearance. The twelve-cylinder has already been described in its basic data shall operate 11.9 percent cheaper than its predecessor version. From the 5th gear, the drive source is disconnected when coasting from the gearbox, so the Bentayga can sail. The start-stop system already switches the engine when rolling towards a set of traffic lights; cylinder deactivation shuts down 6 cylinders when they are not needed.

Model car is at its best

The Kyosho model offers the very best craftsmanship work. The high-quality finish grille and side grille with its honeycomb grill sit accurately in the field of die-cast zinc; on all sides agrees with the distance. The honeycomb structure can also be found on the back seat covers; as well as the Winged B of the Bentley brand. This is also placed three-dimensionally above the grille. The inside of the headlamps, the experts from Kyosho as well modeled as the glass roof and the railing. The exterior mirror housings, the engravings of doors separately applied door handles make the eyes of the collector well and truly shine like the long faded fireworks in the sky. We found: A 1+ for the Bentayga in 1:43 - a really good start to the new year.