There they are, the winners of the 24 Hours of Le Mans in 2015 in 1:43 scale, which Spark has reduced perfectly . Here: Lots of information about the race of the Porsche. 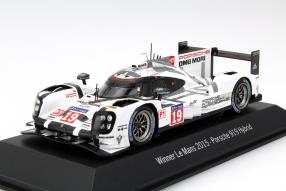 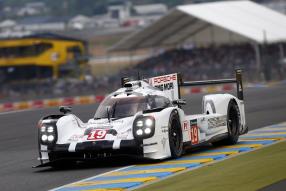 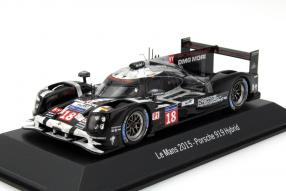 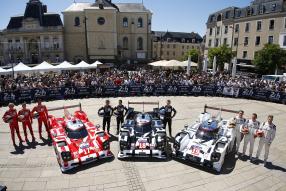 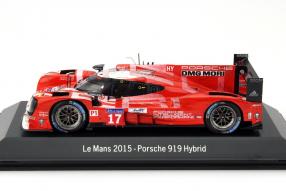 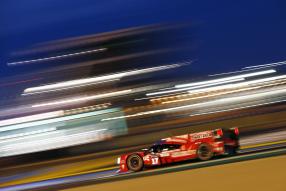 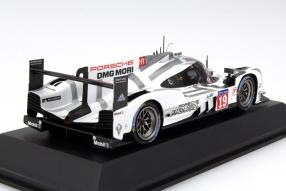 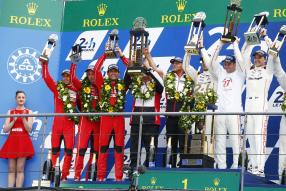 Hugo Ripert and his label Spark present the collectors, in time to accommodate to the Christmas wishlist, the double winners and the fifth-placed of the 24 hour race of Le Mans 2015 - not in the announced for February Traders versions, but as advertising models in the Stuttgarter typical gray overpack. This sheet on the back of each a beautiful photo from the race. The cars come in 2 versions, namely once cleaned spick and span and the other time with the dirt that settles on a car within 24 hours Dauerhatz; a Dirty Version So, in all 3 miniatures are having. That the racing Label Spark delivers fantastic model car whose details and proportions fit, so we already know. If we look still more closely, we look back on a Sunday in the month of June ...

On Sunday, June 14th, 2015 namely, brought the trio Earl Bamber (New Zealand), Nico Hulkenberg (Germany) and Nick Tandy (Great Britain) with the Porsche 919 hybrid in the 17th overall victory for Porsche at the 24 Hours of Le Mans. On the 2nd place the sister car came with Timo Bernhard (Germany), Brendon Hartley (New Zealand) and Mark Webber (Australia) to the finish. So Porsche succeeded in 4 double victory after 1971, 1987 and 1998. And there's more interesting facts and figures about the race that we have listed here for you: The winning team put 395 laps, so 5382.82 kilometers. These are just 2 laps less than the existing record of 2010. The average speed of the victorious Porsche 919 Hybrid was 224.2 kilometers per hour. The highest with a Porsche 919 Hybrid reached the top speed race Mark Webber drove with 340.2 hours kilometers.

The time was measured on Saturday 13 June at exactly 16:40. The Porsche 919 hybrid produced and used per round 2.22 kilowatt hours (8 megajoules) of electrical energy. Had he a power plant, it could provide a quarter with electricity for a single house. The use of the Porsche crew team consisted of 120 people. Busy as bees were the ladies and gentlemen; especially those of the boxes: The Porsche team completed 90 fill-ups, 30 per car; here 26 times were changed riders and tires. The fastest pit stop did the crew in 51.3 seconds. The quickest pit stop with driver and tire change took 1: 13.9 minutes. The longest, driven by a set of tires distances were 54 rounds. At the wheel of the 3 LMP1 while sat Mark Webber (Car Number 17), Jani (# 18) and Nico Hülkenberg (# 19).

Porsche was quite knowledgable


Hülkenberg's modest goal before the race: that the car makes it through the 24 hours, and they may come to the finish. In terms of facts and figures about the race at the Sarthe The Stuttgart gave quite knowledgable. You can feel that the people of Porsche motorsport lies deep in the genes, as do other companies: 116 tires came to the 3 Porsche 919 Hybrid over the race distance for use. A rim with tire weighs 19.9 kg. Thus, the mechanics have akimbo alone on wheels 2308.4 kg. The sum of all boxes-times for the 3 Porsche 919 Hybrid over the entire race lasted only 95 minutes and 36 seconds; the next best teams with 3 cars added to a good 130 minutes. The winning car was fueled with 1,896 gallons of gasoline. 0.85 liters of beverage for each driver was there with every fuel stop now. ;-)

Nico Hülkenberg longest at the wheel


The transmission of the victorious Porsche 919 Hybrid mastered during the 24 hour all 25,293 switching operations of the up and down shifting. The longest journey time of 9 Porsche LMP1 pilots graduated from Neel Jani with 10 hours and 10 minutes. In winning car Nico Hulkenberg at the wheel sat the longest: 8 hours and 52 minutes. Most weight during the race but lost Mark Webber because for start of the race he weighed including racing overalls and helmet 81.2 kg, after his last stint he brought still 78.2 kg on the scales. The highest measured temperature was 27 degrees Celsius cockpit; the highest outdoor temperature was 25 degrees Celsius, at 16:00 clock on Saturday measured. Coolest - 16 degrees Celsius - it was in the night 3:00 to 7:00 clock. During the 24 hours, a liter of oil has been replenished per car each.

Here, the car show pretty reliable and undemanding: There was little need for spare parts during the race. The starting number 18 received a new nose after riding 2 times. For the number 19, the team did in the morning at 08:00 clock as a precaution the exchange of engine cover and rear wing, because this in a safety car phase without loss of time was possible. For clear vision had each of the 3 prototypes 4 films on the windshield, which have been gradually removed. The night was exactly 8 hours between sunset and sunrise at 21:59 clock 05:59 clock. And: It 13.5 gigabytes of data per car during the 24 hours the box was transmitted. The 4 safety car phases, including the so-called Slow Zones / speed limits in individual sections lasted 195 minutes.