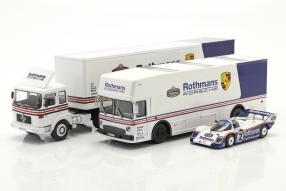 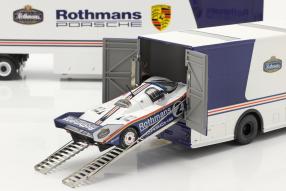 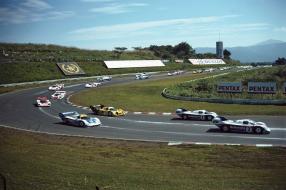 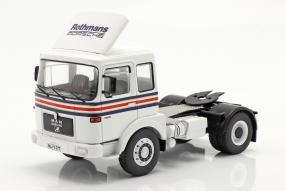 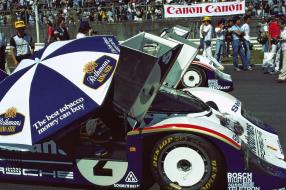 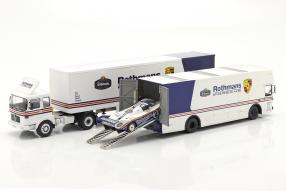 With today's blog article, the editorial staff of ck-modelcars.de aims right in the heart of proper racing fans! And at the same time draws attention to a set that can save you real money when you buy it! Yeah! Pure motorsport, this are the three modelcars, which are available via the link embedded below: Two racing transporter and a Porsche 956 KH, each in scale 1:43 and a uniform design, which identifies them as replicas of models from the legendary times of the car manufacturer Porsche. The diecast modelcars are manufactured by Ixo, Schuco and CMR. All three miniatures bear the design of the Porsche sponsor Rothmans. Rothmans, Benson & Hedges RBH is a transnational company in the tobacco industry that not only supported Porsche in the World Endurance Championship, but also Williams in Formula 1.

With this set, however, we're sticking to the sports car prototypes, of which - the Porsche 956 KH from CMR - enriches the set. Under item number SBC020, this offer includes a downsized vehicle with which John Watson and the unforgettable Stefan Bellof from Gießen finished the 1000 kilometer race in Fuji, Japan, as winners in 1984. The miniatures with the starting number 2 exactly replicate the legendary prototype; The proportions and appearance are perfect! This racing car was a real winner and won all the titles in the FIA World Sports Car Championship from 1982 to 1984. This is true for both the drivers and the brands. Bellof became long-distance world champion in 1984 and thus became the first German world champion on the circuit; so based on the role model of this well-crafted modelcar.

Well crafted: This predicate also applies to the miniatures of both transporters. Under item number TTE022, Ixo produced the MAN Büssing 19.320 racing transporter with the Rothmans-Porsche Motorsport design in format 1:43. The editors really like the slavishly correctly reproduced tractor unit, which leaves no detail out: from the indicators to the radiator grille, the headlights, windshield wipers, interior details to the aluminum cladding on the chassis, Ixo offers really first-class value for the money. This model does not offer any functional parts, but with item number 450373100 the Mercedes-Benz O 317 racing transporter Rothmans-Porsche from Schuco shines, because it scores not only with a meticulously reproduced body, but above all with the tailgate that can be opened.

And behind these double-wing doors there is an extendable loading ramp, which allows the Porsche 956 KH mentioned at the beginning to be loaded. Motorsport couldn't be more authentic in the showcase! The racing transporters are not only beautiful models of themselves, but also a perfect addition to showcase models of sports car prototypes or even Formula 1 racing cars. It is not for nothing that the branch of transport vehicles for AC Cobras to Scuderia Ferrari offers the right vehicles. But hopefully this article arouses your interest in the blue and white cars from Rothmans-Porsche, because the contribution to this set provided by Schuco - presented in more detail in the article accessible via this link - justifies the purchase of this set, which is available at a very affordable price.