The Chevrolet Corvette C8 Stingray of the newest generation appears from diecast as the top novelty in scale 1:18 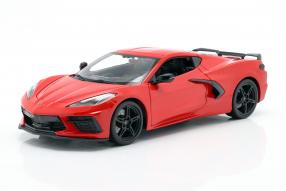 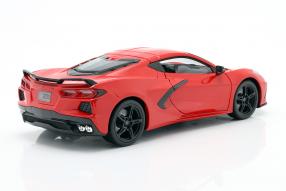 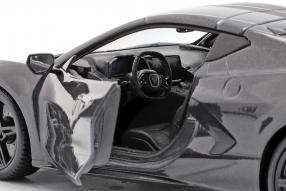 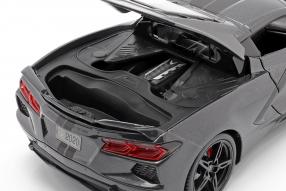 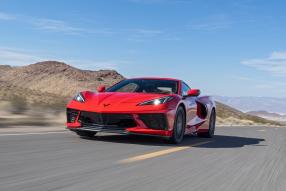 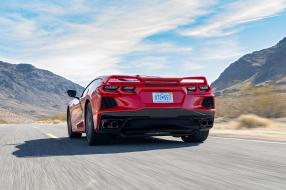 The toy maker Maisto is not known for bringing the newest modelcars of popular super sports cars as the very first one. But now it has succeeded, because with the Chevrolet Corvette C8 coupe of the vintage 2020, Maisto presented models in scale 1:18 after role models, which celebrated its premiere just on July 18th, 2019 and have been in delivery since the beginning of this year. And by the way, ushering in a real turning point, because the C8 is the first Corvette in which the engine is installed behind the occupants: The first generation of the Corvette with a mid-engine positioned in front of the rear axle. The cabriolet followed in October; At the same time, the racing version C8.R also celebrated its debut. The modelcars from Maisto, however, which appear in red and grey and share the item number 31447, reproduce the coupé Stingray.

Design-manager Kirk Bannion stated to the exterior of the Corvette C8 that he has orientated himself on aircraft; Tristan Murphy was responsible for the interior. The new Corvette is built in the GM-factory Bowling Green in the state Kentucky, which has been reinforced by 400 more emloyees. The body is a mix of aluminum, steel, magnesium and carbon fiber reinforced plastic. ZF and Bosch supply the rack and pinion steering, which is electromagnetically servo-assisted. As expected, a Corvette Stingray offers a piece of cream under the bonnet. The engine for the Stingray version has the code number LT2 and is one of the small blocks. The naturally aspirated V8 with a displacement of 6.2 liters develops 369 kW / 502 hp and a maximum torque of 637 Newton meters (Nm), has direct gasoline injection and dry sump lubrication.

So a real icing on the cake that is unfortunately barely visible under the plastic covering in the rear of the modelcar. But the hood can be opened and so you can guess what the role models are capable of: 312 kilometers per hour and in 3.0 seconds to 100 km/h, according to the manufacturer's information for the Stingway. The eight-speed dual clutch transmission transfers the power to the rear-wheel drive. Maisto matches perfectly the lines of its modelcars from the Special Edition and makes the front hood, the doors and, as mentioned, the engine hood that can be opened. The interior is recreated in barren black; The finish and style are a tribute to the low price Maisto is calling for this model. However, it also meets collector's demands and the editors of this blog anticipate that higher quality versions will follow.

Here: Click to the models of the Chevrolet Corvette C8 Stingray in 1:18