The team from Aachen have reduced the racing car of Martin Tomczyk, Nicky Catsburg and Philipp Eng into the scale 1:18. Eng competes in virtual races today 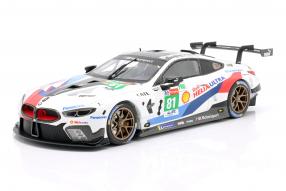 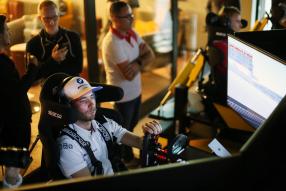 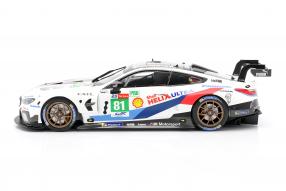 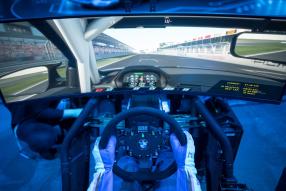 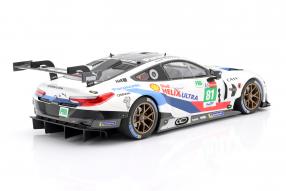 450 units of a miniature that replicate the BMW M8 GTE, with which the drivers Martin Tomczyk, Nicky Catsburg as well as Philipp Eng have started at the 86th version of the legendary 24 Hours of Le Mans, has delivered Minichamps the last week. The modelcars with the starting number 155182981 have appeared in scale 1:18. The team BMW MTEK has achieved the 34th position with the role model of the BMW in 2018 in the overall ranking of the race and thus completed the 24 hours with 332 laps. The winner, the Toyota TS050 by Toyota Gazoo Racing, made it with a total of 338 laps. The racing car, built according to the FIA-WEC-regulations, is based on the BMW M8 of the model series G15 and is actually a thoroughbred device for motorsport: Offering more complex technology than the BMW M8 GT3, which was designed for customer sport. However, it is currently just used virtually.

When developing the model, Minichamps decided for a body of the BMW M8 GTE that is made from diecast though, but dispenses with functional parts. Thus the collector does not get a view under the bonet: The M8 GTE is powered by an eight-cylinder with 4.0 liter displacement and twinscrollturbo-support, which developes a power of more than 367 kW / 500 hp. The outer body of the racing car consists of carbon fiber reinforced plastic and measures a length of 4.980 meters without rear wing. The team from Aachen has met the appearance and proportions down to the last detail for the first time of the racing car, which was used at the 24 Hours of Daytona 2018. In the cockpit, Minichamps supplies a multi-function steering wheel with 16 buttons and seven rotary switches, as well as a color display.

For example, Philipp Eng knows how to use switches and joysticks, because the racing car, which he's currently driving, only exists virtually. Since real racing weekends are out of the question during the weeks of the corona crisis, the calendar of sim racing events is becoming even more extensive. Four big races took place last weekend. Eng achieved the final with the top-class team "THE RACE All-Stars Esports Battle" as well as the third place at the "F1 Esports Virtual Bahrain Grand Prix", the first Sim Race organized by Formula 1. Philipp Eng: "I'm very happy to have my racing simulator at home at the moment, because in this time, where everybody should be careful not to move around in public as much as possible, it is so to say my 'Racing-Replacement-Drug'!"

The Austrian explains what it's all about: "The virtual races help me, especially staying metally in race-mode, because even if it doesn't feel the same in the simulator as in reality, my instincts are the same as on the real race track. I can further sharpen them. So for me Sim-Racing is not only fun, but it also brings me added value as a professional racing driver." BMW Motorsport recognized the added value of Sim-Racing and its increasingly important role early on and made it an additional pillar of its motorsport program. The focus is on two platforms: At iRacing, both BMW works drivers and some of the world's best Sim racers compete primarily in the virtual BMW M8 GTE. But let's hope that we will see the boys again on the tracks in real time.

Click here to the modelcars of the BMW M8 GTE