With the BMW M3 bringing the partners a model on the market that was driven by Dutchman Cornelius Euser in 1991 and warmming the heart of car fans. 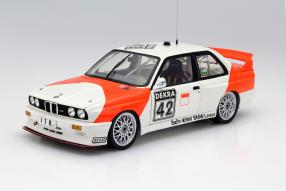 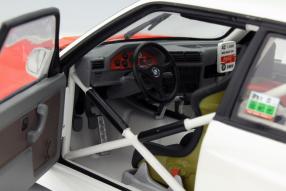 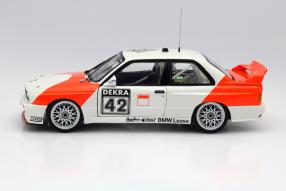 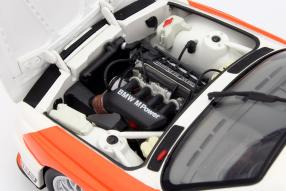 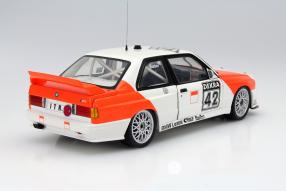 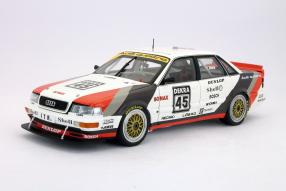 Is it the same for you? Do chills run down your back just thinking about the break of winter? Was there ever such a cold beginning of October? 2°C in the morning, already using the winter coat? It's horrible! But there’s always two sides: the colder it is outside and the earlier it gets dark, the more time we have for our favorite hobby, the collecting of small cars.

And now some good news: model cars are always equipped with all-year-tires so changing to winter tires is obsolete. ;) But joking aside, to take the time to take a closer look at the models and what’s around them is more exciting as many outsiders may think. Because sometimes taking a look at the history of the prototype makes a model really interesting

I have written about the BMW M3 series E30 in scale 1:18 in July this year. I was most thrilled about the Cylinder head of the model car engine, because the details and finishing are the best part of the M3 from Minichamps. That hasn't changed with the M3 with the number 42 from the DTM 1991. But the 1:18 scale model with the number 42 is exclusive and only available from Ck-modelcar.

And behind it hides something that people from today no longer know. Although the BMW from Team BMW Netherlands has been duly notified to attend the eighth season of the new German Touring Car Championship, he does not appear in the results list. Didn't Cornelius Euser do anything?

A M3 Sport Evolution without points

How could it be that a BMW M3 Sport Evolution has remained at the end of the season without a point? Well, 1991 was the second year of participation for the Audi V8 in the DTM - the same Audi V8, which already won the title in his debut in 1990. Was the BMW M3 crushed by the superior power from Ingolstadt? No, not at all. Just that at that time, the species of the guest driver in the DTM was more widespread than it is today.

Cornelius Euser (also called Cor Euser) drove in 1991 mainly in the World Sport scar Championship behind the wheel of a Spice SE90C. At this FIA motorsport series participated Group C sports cars that competed with naturally aspirated and turbocharged engines up to today. The field work consisted of cars from Mercedes, Jaguar, Peugeot and Mazda and has been supplemented by private self-constructions and customer chassis as the Spice.

Born on April 25, 1957 in the Netherlands Oss Cornelius "Cor" Euser,  after racing 8 races made 54 points, thus securing the 5th place among 60 reported drivers and brought his team so the 4th place overall. One place behind the team Sauber Mercedes with the types C11 and C291. Because of his job he didn't have a lot of time for the DTM. So therefore he could only take part in 7 of the 12 races, receiving no points.

However, the attractiveness of the model car from Minichamps does not diminish. As with the other M3 E30 in 1:18 also shines the miniature die-cast zinc with a faithful interior, as I said a highly detailed engine compartment, steerable front wheels and all-around opening doors and hoods. The model is limited to only 1,000 units.

Can't say it enough, the motor is the highlight

By the way the decals of the cigarette brand can additionally be applied. From my perspective, the model car is especially true with the engine - the cabling as well as provides the spark plug connector and a variety of materials that helps to illustrate the details of the 2.5-liter four-cylinder in-line engine of the type S14 perfect - in the heart. In an example, he delivered 175 kW / 238 hp; the car was limited to 600 pieces.

To warm up the heart of the fans of M-Power when it’s so cold outside, I've tracked down a video that contains many sequences of the E30 BMW M3 series. The title of the DTM in 1991, however, went again at Audi: For the first time in the history of the championship, a title could be defended, but this time it was not - as in 1990 - Hans Joachim Stuck, the triumph secured, but his fellow Frank Biela.