CultScaleModels conjures the collectors a little spring mood into the showcases with miniatures of the six-cylinder in 1:18 to match the rising temperatures 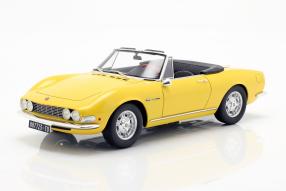 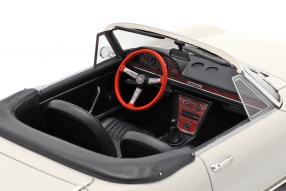 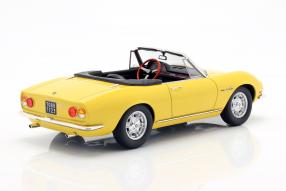 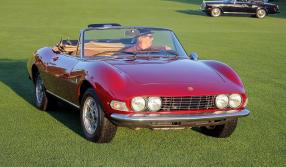 The days, in which Fiat offered attractive vehicles with six cylinders under the bonnet are over. In the meantime, the volume manufacturer from Italy predominantly leads small cars providing that, like Volkswagen, for example, they did not understand how to set up a range from the smallest cars to the luxury class. 1966, the year in which the Fiat Dino was introduced, both companies with cars like the VW Beetle and the Fiat 500 still had the same starting position, but it was only the Germans who saw an incomparable rise with the purchase of Audi from 1964 succeeded. The V6, which was intended for racing, goes back to the ideas of Enzo Ferrari's son Dino, but was built into the Fiat Dino due to the lack of Ferrari's ability to achieve the sufficient number for homologation. And this in a body concept that is still fascinating today.

It is pure pleasure, the purest turn-on that car fans of racy convertibles from Italy have succumbed to today. Hardly any other shape inspires the dreams and thoughts surrounding beautiful sunny days and driving through country roads through orange groves, like that of a Fiat Dino. CultScaleModels has now released a yellow modelcar of the Dino Spyder under the item numbers CML087-2 and a white one under CML087-3, which, as usual with this label, transfers the appearance of the lines exactly to the scale 1:18. In addition, it knows how to inspire with a multitude of details that fans can look at wonderfully thanks to the conceptually open roof. There are six circular instruments embedded in a wooden carrier that emit significantly more atmosphere than the black dashboards with silver decor or carbon trim nowadays.

The wooden steering wheel, its three spokes, the flawlessly correct design of the filigree iron door handles and the replica of the aluminum rims are just mega. Simply breathtaking - we believe that this is the essence of the design of the Dino - the swing in the front fenders, which CultScaleModels met precisely in its model made of high-quality resin for the year of construction 1966. In the year of the debut of the Dino 2000 Spyder, the V6 produced 118 kW / 160 hp from its 2.0 liter displacement with the support of its three Weber carburettors. The Dino was available as a coupe designed by Bertone and as a convertible designed by Pininfarina, the Spyder. At temperatures up to 15 degrees, which we currently have - in December (!) - it is actually not difficult concerning the modelcars to think about the first drive-out with the Spyder in spring.

Here: Click to the modelcars of the Fiat Dino 1966