The fourth part of the dinosaurs adventure starts in german theaters on June 11th 2015. Jada toys brings out one of the main characters in size 1:24 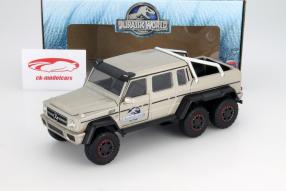 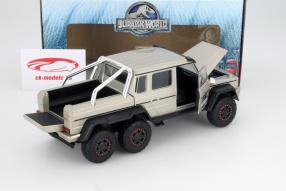 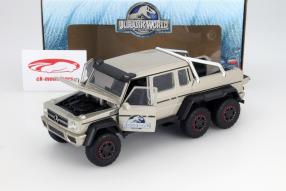 One would think that the car models in the online shop of CK-model cars offers enough entertainment.  True, too, because some 8,000 permanently available miniatures in the shop founded by Christoph Krombach 2004  invite you to surf and browse. Of course it is not possible to bring background reports of every single one of them, so we make sure to tell you about those ones with a special story behind it, thats why we have founded this blog. So right here is where you will find out all background information, that doesnt have a spot in the online shop, such as the Info that Jurassic Parc is going to be in the movie theaters june 16th of 2015. But what does this have to do with modelcars, you wonder.


"Jurassic World" tells the story of the opened park


Quite a lot, for that, just like in 1993, A Mercedes Benz,  the M-Class  this time, plays the automobile starring role. As well as on the model of Jada Toys the six-wheeled Mercedes-Benz G 63 AMG 6x6    is equipped with the logo of "Jurassic World" on the doors and showes itself to be a part of the park, which is now opened in the movie.  22 years after the action of "Jurassic Park" the strip continues the story of the park on Isla Nublar and shows, finally, that it can work out with the park and the dinosaurs : According to the story there are 10 million visitors annually, to  get up close to the prehistoric monsters.

But - just like we thought -something goes wrong. The dinosaurs break out and hunt down the park visitors. We are not going to reveal yet whether the Mercedes-Benz G 63 AMG 6x6 is going to save people or gets torn apart.  Well, actually we don't even know ourselfes. What we do know about though is the modelcar: is  painted in silver and made of zinc die-cast in size 1:24; very stable and perfect proportions. The model car from the californian manufacturer Jada Toys meets the look and appearance whitout leaving any reason for criticism. Especially when you look at the low price of 24,95 Euros.

Less collector quality, but many features to have fun with

The front doors, the tailgate of the trailer and the hood can be opened. The interior features the most important details of the small-series pickup; the roll cage on the platform is chrome-colored and looks solid.  The front hood gives a good view of a rather toy like styled driving source; we like the durable construction of the little dino-hunter. Oops, did we just spoiler you? Go to the movies and see for yourself! Best with the model in your pocket. The main characters of the movies, aside the Mercedes Benz, are played by actor Chris Pratt ("Guardians of the galaxy"), Vincent D'Onofrio ("Marvel's Daredevil") and Broadway actress Bryce Dallas Howard s. The screenplay was written by Derek Connolly, Rick Jaffa and Amanda Silver and Colin Trevorrow, who also directed.  We hope that, with these lines, we could give you a little insight on what the blogs are about; Just as garantueed as our fast delivery, is the fact that we  have quite a few more stories to tell.  Even without dinasaurs.