06.10.2017Exclusive at ck-modelcars: Sebastian Vettel in the BMW

A test from more than eleven years ago is remembered in a special model from Minichamps in 1:18 scale, which is limited to 999 units. 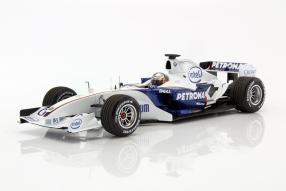 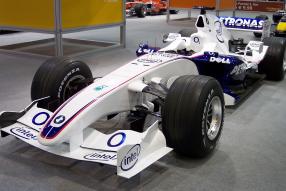 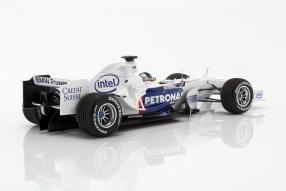 From the 24th until the 26th of November 2006, BMW in Valencia gathered the most successful drivers, who were driving in different country-classes in Formula cars with power units from Munich. In this so-called Dell Formula BMW World Final, 38 drivers from 18 nations competed. Not the 60,000 USD prize money, but the test in a BMW Sauber F1 was at the time the highlight for the young pilots at the end of the season 2006. For the Bavarian automobile manufacturer it was the end of the first year as Teameigner, because the racing team was only on the 1st of January this year from the takeover of Sauber. Peter Sauber remained in the name and as a consultant, but BMW led the team, headed by Mario Theissen. Computer maker Dell was one of the main sponsors and was therefore present on the car as well as on behalf of the final event.

And it was filled with names, which were heard again and again in the following years: Earl Bamber, for example, later Le Mans winner on Porsche LMP1 and at that time winner of the Formula BMW Asia. Robert Wickens and Christian Vietoris from the field of touring cars: Wickens won the BMW Formula in the USA, Vietoris won eight of the 18 Formula BMW Germany races in 2006. Drivers from four regional series in Germany, Great Britain, Asia and North America took part in the event in Valencia and met at the Circuit de la Comunitat. Mario Theissen, then BMW Motorsport boss, said: "I am delighted to be able to offer the young talents the chance to compete with other drivers from all parts of the world."

Vettel in the BMW Sauber F1 now as an exclusive model

Oh, and there were still Robert Kubica and Sebastian Vettel: Kubica was a regular at BMW Sauber F1, while Vettel came as a test driver in August 2006 as a test driver. With him the Friday stunts were carried out. In Valencia both tested: Robert Kubica with the BMW Sauber F1.07-01, powered by the BMW V8 of the type P86 / 7; Vettel in the F1.06-05B with the same engine pattern. Vettel raced 88 laps in Valencia, 352 kilometers, and was able to point to the fastest lap of 1: 13.490 minutes. Kubica was a bit faster with more practice in the vehicle at 1: 12,310. Old chassis, new engine: The transitional car in the Vettel and Kubica versions, which are two very special highlights in the top finish of Minichamps. No fan of Sebastian Vettel should do without this car! A car from the time when his vehicles still did not carry any names.