We are looking forward to brand new model cars of the W07 from Hamilton and Rosberg, because the team already pushes their successors into the spotlight. 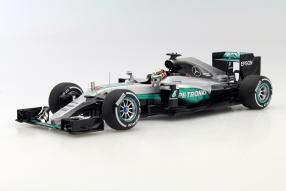 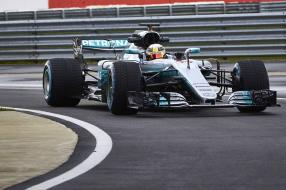 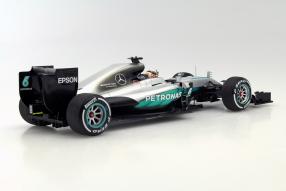 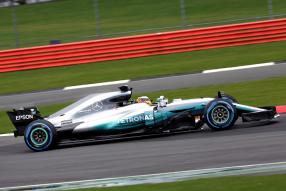 Yes, we are slowly realizing it: it is spring - at least as far as the cars in Formula 1 are concerned for the new season, which are now being successively revealed. On our partner blog was the Sauber C36 Ferrari theme yesterday, today the Mercedes-AMG Petronas F1 W08 EQ Power + has been the turn of the series. The team revealed today the new car for Lewis Hamilton and Valtteri Bottas on the Internet, emphasizing the direction of the race to the fans. We like it: No VIPs, but people like you and me in focus. How will the model car makers Spark and Minichamps convert the new vehicle finish into the model: a color with an electric blue visual characteristic to mark the hybrid drive (see photos of the track).

Mercedes-AMG Petronas Motorsport today, with the official presentation of the new F1 W08 EQ Power + laid the foundation for the Formula 1 season 2017. The new car was given to the fans by means of a 360-degree live transmission from the boxes in Silverstone on Facebook , YouTube and the official team website. The team reaffirmed its fan-oriented concept, which made the social media community of Mercedes-AMG Petronas Motorsport the largest in Formula 1 with more than 14 million people. The presentation was part of the official 100 kilometer film day of the team, during which the F1 W08 EQ Power + completed its first laps on the 2.96 kilometer International Circuit in Silverstone. Both Lewis Hamilton and Valtteri Bottas were at the wheel of the new racing car, which was developed according to the radically modified aerodynamic rules.

By the new rules, the new cars this year could become the fastest in the history of the sport. The improvement of the performance, according to Mercedes-AMG Petronas F1, was the focus of the reconstruction work. At the same time, however, there is sufficient scope for further developments during the season. The development progress is expected to be among the largest in the history of Formula One. That sounds exciting! By the way, as far as the development progress is concerned, the small series label BBR is now setting the bar in model building, as new models for last year's Vettel company cars feature an adjustable DRS. We are now expecting this from Minichamps. And models with detachable bonnet according to current models are overdue, dear Mr. Lang!

Official advertising models of the W07 in best form

The Power Unit M08 EQ Power + under the cover of the new W08 is the fourth version of the Turbo-Hybrid generation. It is designed to withstand the much stronger physical stress due to the application of the new rules, as well as a harder use cycle. At the same time, potential performance developments should be exploited to the best possible extent. Minichamps also offers a good performance with the miniatures of the F1 W07 from Rosberg and Hamilton, which were delivered under the item numbers B66960414 resp. B66960413 in the scale 1:18 and came as market models on the market. As expected, the miniatures are kept in top quality; Look, antennas, the design of the spoilers at the bow and stern are just fantastic.