Kyosho brings Modellautos to one of the toughest, most original sports car ever and enriches the showcases with a great work. 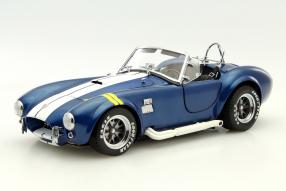 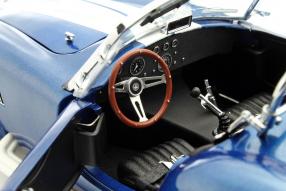 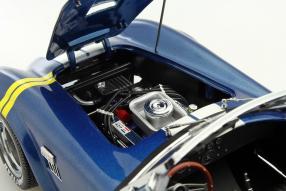 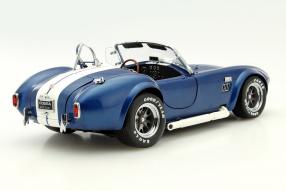 Improved materials and components, such as Shelby American Inc., are incorporated into today's Shelby Cobra vehicles, but the concept is still based on the original design of 1966. The model cartel Kyosho is currently presenting two incredibly detailed miniatures Sports car, more specifically the Shelby Cobra 427 S / C or CSX6000, as the car is run at Shelby American. So we stay behind Mazda's yesterday's roadster, a bit more fun-oriented, open two-handed, but jump to the other end of the up-market price scale and look at how Kyosho's task - a rather tough men-appealing legend Down - has solved. A car from the time when sports cars were defined differently than today.

Looking back into the present

The development of the Shelby Cobra 427 S / C began in 1965; The year in which the car makers around Carrol Shelby realized that the design of the sports car was overwhelmed with the installation of the 213 kW / 425 hp 7.0 liter V8. A stiffer chassis, a completely new chassis and a widened body were the result of the work to meet the engine with 427 cubic inch cubic capacity - therefore the designation, 427 cubic inches correspond to 7.0 liters. The 427 were built for motorsports, race strips and sidepipes and the letters S / C for semicompetition were tacked. They differed from the normal Cobra in addition to the external elements also in the execution of the instruments and the renouncement of comfort equipments. 50 Shelby 427 S / C left the workshop; 16 of which are further modified and used in racing.

In addition, many cars were built for the road with the look of the S / C, which our friends from Kyosho chose as their model in two color combinations. While Shelby American used fiberglass for the outer skin and aluminum for the chassis to manufacture the cars, Kyosho chose the model for zinc die-casting. Accordingly, all doors and hoods are provided for opening. Under the blackened bonnet, the fan finds a meticulously reproduced drive set with cables and lines, which absolutely correspond to the model in the optics. Kyosho has, of course, also thought of the plaque 427 S / C, which can be found on the cylinder head cover as well as on the exterior of the mudguards.

The model inspires with loving work

The front cooling air intake, the sidepipes, the comparatively filigree windshield frame and the overrunning brackets limited to the driver are first-class craftsmanship. The dashboard gives a fantastic impression of what is good enough to drive. Multimedia? Is what for Pussies, so obviously still the view of Shelby American. Underneath the trunk lid there is an aluminum-colored, straight-cut plastic part in the optics of the aluminum troughs as they were used earlier for the expansion of the grate tube frames. Over-dimensioned tires and a steering wheel in wood look round the good impression of the high-quality model. It does not really get any firmer, so our conclusion to the model and the model. When does the spring come with the right weather? Or is it maybe just for Pussies?