In 2 years it will make with 30 years its vintage status. Now Ottomobile give a gift to friends of the little sporty; a beautiful model. 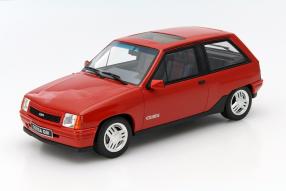 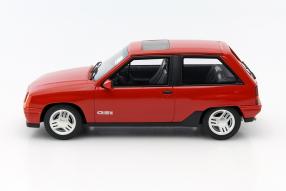 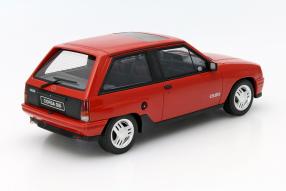 While Opel has advertised on the Geneva Motor Show in 2016 with a study on the upcoming Opel GT, Otto Mobile puts another small Jester from Opel's history in the focus of our interest, namely the Opel Corsa A GSi from the production period 1988 to 1990. The scale 1:18 held, red-painted model car corresponds in appearance perfectly modeled, which decreed against its weaker brothers a separate grille and a spoiler surround the rear window; Ottomobile has the lines and the look of the small GSI very well modeled. As usual with these models resine plastic remain doors and hoods of the listed with 79.95 Euro model car unfortunately closed. We therefore take a look at what is on the desk in front of us.

Many, very nicely made Details

So there are no moving parts, but that's, given the quality of the model car of the small Corsa, something we can get over. This is because the development of lines and details like so much. Have a look at the finish of the radiator grille, the windshield wipers and the headlights. The exposing of the seals of the windscreen, the door frame and the recessed antenna testifies loving detail in the development department of Otto Mobile. Bicolor running mirrors and the folding door handles presented in artisanal allerbestem look. Inside, it's too spartan, but that was just state of affairs in the late 1980s and was implemented knowledgeable and careful of Otto Mobile.

In addition to the instrument panel and the polyphonic instruments liked the plaid seat covers particularly well. The interior of the Corsa GSI can be observed very easily through the glass roof. The picturesque rim, the lettering on the doors and for the laminated between the taillights tailgate were the GSI reserved. The model appeared exactly in May 1988 with 1.6-liter OHC engine as three-door hatchback. First, the Corsa GSi had an L3-Jetronic, with the aid of motor 74 kW / 100 PS attained; by 1989 there were on request at extra cost a GSi with TWC and 72 kW / 98 hp, which later replaced the unrefined version. The model is ready with the item number OT180 to friends unforgettable Opel and receives from us the note. 2