highly exclusive : TopMarques brings quality models of the legendary winner of the Pikes Peak race in 1987 at a scale of 1:18 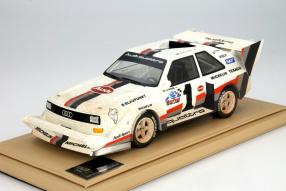 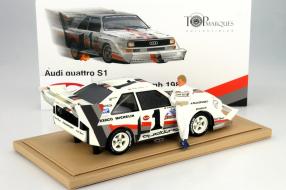 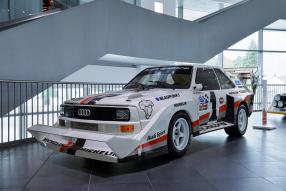 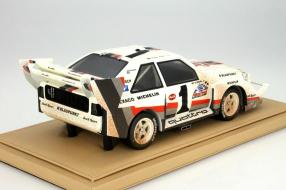 TopMarques, maker of high quality models in resine plastic 1:18 scale has a  a good reputation among collectors. Just now the brand surprised with a sensationally successful McLaren P1 in scale 1:12. Maybe one of the most beautiful models founded by the famous model carmaker BBR though might be the Audi Sport quattro S1 bought out in 2 versions. The original car became a legend in 1987 by his victory in the Pikes Peak International Hill Climb in Colorado/ USA American. There will be a limited  edition of 200 copies each, exclusively to ck-modelcars customers.


Model cars of TopMarques keep what they promise: first-class finish during processing, harmonious proportions and in relation to each model  absolutely correct appearance characterize the small series models made from resine plastic. TopMarques qualifies  as the right partner for miniatures, which are connected with a world champion.  Walter Röhrl was the one driver who as already mentioned, with just 7 seconds ahead of the second placed Peugeot 205 T16 of Ari Vatanen he won the Pikes Peak International Hill Climb  race, also known as the race to the Clouds.


10 minutes and 47.85 seconds marked not only a new course record - Röhrl was the first driver who took less than 11 minutes to the finish line. No other vehicle with a front engine has climbed the mountain faster since then . The street version of the Audi Sport quattro was built in an edition of 220 copies and presented in 1983 at the IAA in Frankfurt / Main. The cars with their respective 225 kW / 306 hp were primarily built for homologation according to the FIA regulations for Group B. Front spoiler and tailgate of the two-door car were made from glass fiber reinforced polyester resin
Fenders, side panels back, roof, hood, front and rear apron  of the  over 32 centimeters shorter Audi quattro compared to te sport quattro,  are made of laminated aramid fabric, epoxy resin and various other additives. Therefore, the model of  TopMarques- made from quality resine plastic matches the choice of materials very well. Unlike the original the doors and hood remain shut on their Resine model and prevent the view  at the very fine art around the five-cylinder turbo, four-valved motor. But - rather rare in model cars - the driver is included.


Top Marques and ck-modelcars offer the car sparkling clean, including the figurine of the driver born on March 07, 1947  as well as the "dirty" version after the race. The front but also wheels and the rear have  gotten some mudsplatters. This version is limited to 200 copies exclusively to  ck-modelcars customers under item no CK002 at a price of 199.95 Euro ; including a base plate with engraving. The model with the order numbers CK001 and AE180113 it is slightly more expensive; Carwash plus driver come at a price: 229,95 Euro.
Compared to how much a world champion earns it is still cheap. Walter Röhrl - also called "The Long" -  a professional driver in rallying from 1073 until 1987  won the FIA Drivers' World Championships 1980 and 1982 and the European Championship in 1974. Röhrl won the  Rally Monte Carlo four times. Throughout his career, the man from Regensburg/Germany  drove for Fiat, Opel, Lancia and Audi; as a driver of the Audi V8 DTM  he ended his career as a professional racing driver in 1992. To date, Walter Röhrl is representative of the Porsche brand; the only representative of Stuttgart, you can put in your showcase.