The Transparent Factory makes headlines in mid-March 2016, the production of the VW Phaeton is stoped. Time to secure a model. 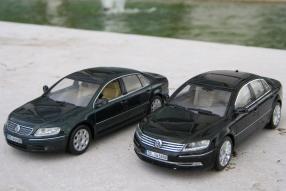 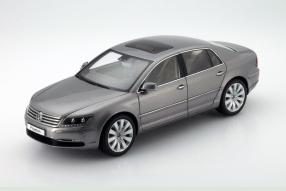 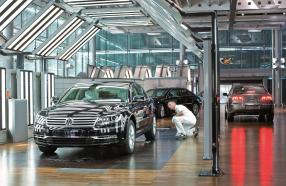 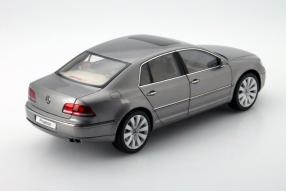 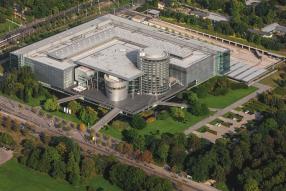 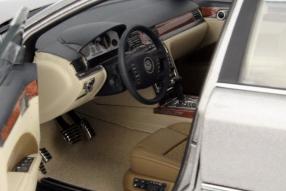 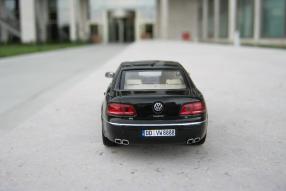 For fans of the big Volkswagenvery bad news has made its rounds since yesterday. In Dresden, the staff of the Transparent Factory were informed that there will be no new production in the showmans factory. The VW Phaeton was, since 2002, in the built planned by architect Günther Henn Glaspalast; after 13 years of his time its coming to an end.

In the eyes of the experts, the Transparent Factory was - more than the car that came to her - a highly successful marketing tool. Situated in close proximity to the baroque city of Dresden, factory area forms the northwest corner of the park Large garden; southeast is the area in front of the Botanical Garden. Before construction there have been many discussions about the situation, because especially environmentalists protested.

But, with the logistics system that the manufactory shipped the freight by tram, VW sat again a benchmark in modern manufacturing high-class automobiles: Only the bodies of Mosel / Zwickau are supplied by truck; all other parts by CarGoTram. The customer and every other fan received with opening the opportunity, the transparent car factory and the production of the luxury sedan Phaeton to witness live. From the window of the body mount on the bright, atelier-like production rooms up to the vehicle cylinder - in the waiting finished Phaeton on its delivery - is the production of the Phaeton can also be experienced from outside. The luxurious ambience corresponds to the claim of the Phaeton, but also serves the well-being of approximately 800 employees: glass and parquet, everywhere you look.

Technical equipment at its finest

Areas where customers can configure the Phaeton in a dignified atmosphere, have been set up there as well as a shop with exclusive available only where the model of the VW Phaeton 1:43; one of which we will show on the top right photo on this post. Instead of a conveyor belt installation on Drehhubtischen and called Dresdner hanger, a method developed by the TU Dresden especially for the manufacture electrified monorail system takes place. Glare-free luminaires that are controlled so that birds and the rare hermit are not irritated, provide pleasant light. An underground test track forms Cobblestone, transverse grooves and extreme showers for leak testing nach.Die experts in any case was thrilled: the production of an automobile ever was so staged.

From the marketing tool

The Transparent Factory made the world talked about it. She was and is marketing at its best. But now it's over. Mid March 2016 runs the latest Phaeton from the band; be long finished successor will have to save a victim of gas scandal, because the Volkswagen. The fact that the Phaeton, the base announced the Bentley Continental Flying Spur, the GT and GTC convertible and the overall economic consideration outperformed, as is commonly heard at round tables, will be forgotten. An excited by the news of the gas scandal Electric Phaeton does not come before 2020, so that the reconstruction of the factory confirmed by Volkswagen can be considered a full content announcement hardly. For events and Deliveries 100 employees will remain in the factory; the others are to be used in Zwickau.

The Transparent Factory in numbers

The corresponding plot is 81,210 square meters. On the logistics yard eliminated 16,300 square meters. The building is 147 meters long and as wide. The height of the main building structure is 24.90 meters. The gross floor area amounts to 81,600 square meters. The body mount measures in the height 29 meters, the length and depth of 65.50 meters 9.70. The vehicle cylinder is 39.90 meters high and houses with a diameter of 30.02 meters 300 vehicles. The garage has 290 parking spaces on 2 levels. The cars built on 58 scales over two floors; each scale has 63 square meters to a total length of 522 meters. The glass facades measuring 26,700 square meters; 19,000 square meters of parquet (oak and maple) are laid. Motorvision presented the factory in the embedded video above.

Model cars from the VW Phaeton

In 2002, there was Minichamps in 1:43, Wiking in 1:87 and 1:18 AutoArt, which have brought out the model car to Volkswagen's flagship. With the probably the biggest facelift in 2011, the Phaeton received a facelift; Minichamps brought to a model that was never commercially available and could be had only in the Transparent Factory and is.

The current generation reduced Kyosho in 1:18; Only the chrome surround under the front bumper were not this model. It is nevertheless true that the model car from Kyosho to the last detail, right down to the felt flooring, to the details in the engine compartment as well as to those of the dashboard with the best car models that there is. Soon, however, they will no longer have and its history - as the best Volkswagen, which it has ever been.