Norev decided to recreate a special version of the Beetle from diecast and in scale 1:18 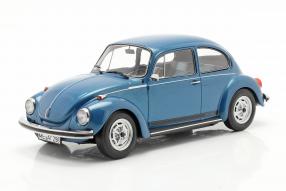 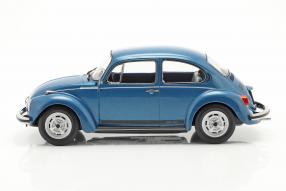 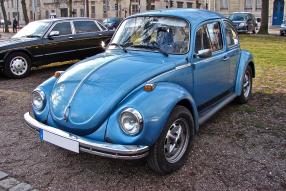 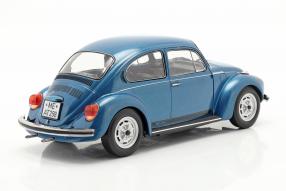 The fans, who want to put the newest miniatures of the VW Beetle from Norev into their showcases, can write the item number 188525 on the notepad. The novelty rreplicates the special version Volkswagen 13030 City, wich was launched by the car manufacturer from Wolsburg in 1973. Internally designated with the number S 764, the prototypes were available in the colors ibiza red (L31M), Ischia metallic (L99 M green) and Ontario metallic (L95M medium blue), which Norev has chosen for its modelcars. The decorations on the seat covers were coordinated with the paintwork. On the sides, the vehicles drew attention to themselves with a stripe on which 1303 City could be read. Exactly the right car for the day when the pleasant things in life on the Internet are looked back on, Throwback Thursday.

Norev has exactly transferred the details from the role model to the scale 1:18. This not only counts for the seat covers and the decor stripes, but also the replication of the 4.5 x 15 inches steel disk wheels, which were called as sport rims. Less visible on the models are the parking disc in the sun visor, which is part of the original equipment, the loop pile carpet, the radio with four frequency ranges and the dimmable interior mirror. The reversing light in the taillight units popularly known as elephant feet are available; as well as the rubber strips on the bumpers. A tribute to the little bumps that are common in the city; often missed in today's high-gloss painted bumpers of all cars, which are no longer bumpers that protect against scratches in city traffic.

The Volkswagen 1303 City had started with 7,440.00 DM (former German currency). The car of the lower middle-class was powered by a 1.3 liter four-cylinder boxer engine with 32 kW / 44hp, with a maximum torque of 88 Newton meters (Nm) to the four-speed transmission. 26 seconds were to be seen, until the 1303 accelerated to 100 kilometers per hour. At 125 top speed it was end of the story, nothing to add. However: Even with this the owners reached their destination. The models from Norev also hit the target, i.e. the heart of the fans: They perfectly reflect the lines and thus the look and feel of the 1303, which is no easy task for the mold makers when it comes to the curves of this model. The chrome trim, the decorative stripes, the ventilation openings - all the details prove that these models are worth the focus on Throwback Thursday.