On the weekend of September 26th and 27th, it is not just about the Nordschleife: ck-modelcars.de with one-time special offer 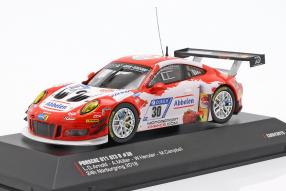 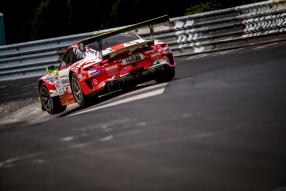 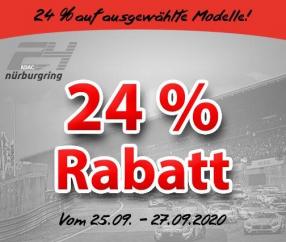 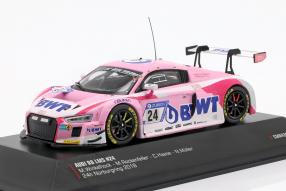 The Nürburgring is one of the most famous, notorious, as well as the most demanding and beautiful race tracks in the world. The 24 Hour classic event in the Eifel runs over a 25.378-kilometer combination of a Grand Prix track and the Nordschleife. The three-time Formula 1 world champion Jackie Stewart baptized this “Green Hell” because of its extreme differences in altitude, changing road surfaces and many confusing bends and crests - today, as always, a real challenge for all drivers. The special attraction of the 24 Hour marathon consists of the side-by-side of top-level and popular sport. The race will start next Saturday at 3:30 pm, planned finish on the following Sunday at the same time. Unfortunately, due to the Corona, only 5,000 viewers have the opportunity to be there live, but ck-modelcars.de is open to all fans!

And ck-modelcars.de came up with a great promotion: From Friday September 25th to Sunday September 27th, ck-modelcars.de is offering an extra 24% discount on selected items! 24 Hours, 24 percent! To do this, click on the link embedded below or follow the instructions on Instagram or Twitter! There are fantastic modelcars at equally fantastic prices: The winner of the 24 Hours at the Nürburgring in 2018, for example, the striking yellow-green Grello Porsche 911 GT3 R from Manthey Racing; also in the decoration of the pole position. The scale 1:43 models from CMR with the item numbers CMR43012 and CMR43011 as well as the pole version from Minichamps (413186711) will not receive a new edition in 2020: the team had to cancel before the start of qualifying on Friday.

Managing Director Nicolas Raeder explains the situation, which is why the crowd favorite will not start: “Unfortunately we had to decide late on Monday evening that we would not start with our 'Grello' at this year's 24 Hour race at the Nürburgring. The reason for this was positive Covid-19 tests within the group of people of the Porsche Motorsport GT Team in Le Mans. These tests were routinely carried out on the Sunday after the 24 Hours of Le Mans and led to the decision that, for safety reasons, none of the people who were there for Porsche Motorsport at Le Mans will travel to the Nürburgring.” This is also confirmed by car manufacturer from Stuttgart Sports: "Porsche Motorsport has decided that for safety reasons no participant in the French endurance classic will travel to the Eifel!"

So on Saturday, seven 911 GT3 Rs from four Porsche customer teams with newly assembled driver crews will start the race in the top category SP9. Porsche thus remains the most strongly represented brand at the long-distance event, which is taking place four months later than planned due to the corona pandemic: About a third of the around 100 vehicles in the field are 911 and 718 Cayman racing cars. Porsche supports its customer teams Falken Motorsports, Frikadelli Racing, Huber Motorsport and KCMG with their use in the Eifel with drivers from their own squad, among other things. New to the 911 GT3 R squad are brand ambassadors Timo Bernhard (Germany) and Earl Bamber (New Zealand), two overall Le Mans winners and endurance world champions. But now back to the model ar special from ck-modelcars.de, including also with Mercedes-Benz.

In 2017, the famous black Mercedes-AMG GT3 in the design of sponsor Haribo with Lance David Arnold, Maximilian Götz and Renger van der Zande competed at the Nürburgring 24 Hours. The modelcars with the starting number 8 are available at a reduced price in a scale 1:43 and in a large scale 1:12. Audi R8 LMS's can also be found in the format 1:43 from CMR - there is an unbelievably large number of modelcars that ck-modelcars.de is offering for the 48th edition of the 24 Hour race: To the fat years of the DTM 1991 and 1992 remind the BMW M3 from CMR in 1:43. Many models are only available at ck-modelcars.de!

So it is worth taking a look at ck-modelcars.de while watching the race: The free TV broadcaster RTL Nitro will broadcast the top qualifying (September 25th, from 6.15 pm) and the entire race live; as well as 24h-Rennen.de and on Youtube it can also be seen! Have lots of fun with it!