The premium label brings a beautiful M3 GTS in 2 colors. First-class workmanship and many details sum up a top model 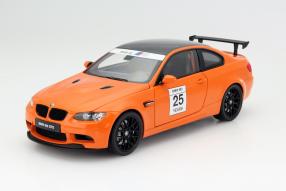 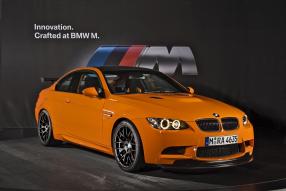 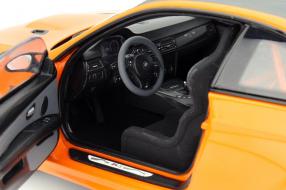 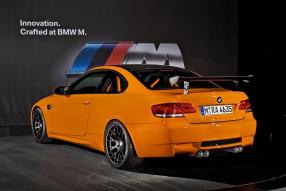 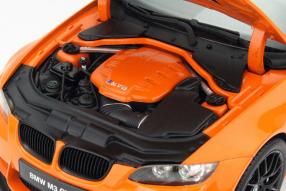 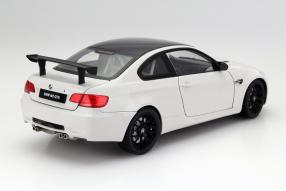 Kyosho is one of the model car companies that bring the best car miniatures in trade. The finish, the gaps between the openable components and especially the detailing are top notch. So when unpacking the two BMW M3 GTS in the size 1:18 expectations will be driven to the tip. Is the high standard maintained? To come straight to it, yes, it is. The model, lacquered in Mineral White and Fire Orange, matches the prototype that came on the market in 2010 as a variant of the coupe and E39 in which for reasons of weight optimization, the roof is made of carbon fiber reinforced plastic. Kyosho has the most striking detail of the M3 GTS performed just as well as the mighty rear spoiler on the trunk lid to be opened.

The model car of the M3 GTS is made of zinc die-cast, providing all-round functioning doors and hoods. The strongest  variant of the BMW M3 Coupé, with 331 kW / 450 hp, has been designed specifically for use at club sport events, at the same time offering the opportunity for legal street usage. The prototype of our model was produced in the manufacture of BMW M GmbH, which has the status of an independent automobile manufacturer.

The designated as a high-performance sports car by the manufacturer M3 GTS features in addition to the comparison with normal M3 in displacement and uprated V8 engine via a specifically tuned 7-speed M Drivelogic double-clutch gearbox, more torque, a modified suspension technology, as well as through targeted optimization in the areas of aerodynamics and lightweight construction.

The performance of a top athlete

As always with Kyosho, the chassis and the replica had a high level of attention dedicated to it, wich can be seen in the color-differentiated reproduction of the details on the exhaust system and the Heat- blocking-blech. That the front wheels of the model are made steerable is almost not mentionable. Of course, the bottom of the V8 has been copied, but the most beautiful sight is of the model engine, of course, when you look under the hood.

Different colorations raise the individual components from each other well. For example, the power to weight ratio is reduced to 3.4 kilograms per hp. In the optimized for the racetrack transmission and chassis configuration of the BMW M3 GTS accelerates within only 4.4 seconds from 0 to 100 kilometers per hour.

Perfect work also in the interior

The 1,000-meter mark is reached in 22.5 seconds. Top speed is 305 kilometers per hour. you can get a picture of the performance of the M3 GTS from the video that we have set for this item. Wich only awakens a desire in me, with an M3 GTS, as Semir Gerkhan and Ben Jäger from the series "Alarm für Cobra 11 - The highway Police "to apply full throttle. But unfortunately we mere mortals have to abide by the speed limit. just on the desk, we can freely rotate our desire laps with the model from Kyosho. Inside the model M3 we see the meticulously reduced rollbar. Kyosho has obviously not spared in details in the interior with the 134,95-euro M3 GTS. Instruments and controls are perfectly made.

The 25 commemorates the birthday of the M3

A particularly lightweight construction of center console and door linings was chosen by BMW from the prototype to further drive the weight optimization. Therefore, it came to the use of rear side windows and a rear window made of polycarbonate, the renunciation of rear seats as well as a vehicle-specific configured Soundproofing.

The curb weight of the BMW M3 GTS according to DIN standard is 1530 kg including roll bar; the basic M3  weighed 1600 kg. The standard of the BMW M3 climate control and audio system could be integrated on request. Kyosho also formed the thoroughbred racing bucket seats and trims the interior trim in Carbon design perfectly. The 25 on orange model commemorates the 25th anniversary of the M3, the Year of the GTS was celebrated in 2010.

[29.09.2015] Spark brings out winning car from the World Rally Championship