The result on Saturday was sobering of the KÜS Team75 Bernhard; the greater was the joy about the 2nd place at the Sunday race / Visit in the pit lane 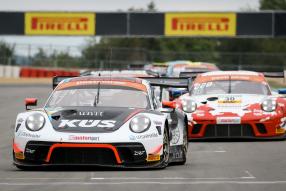 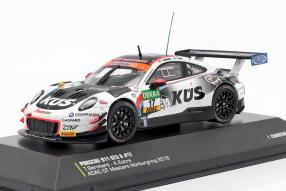 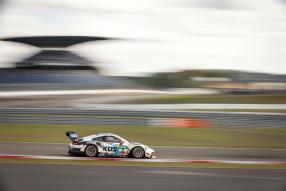 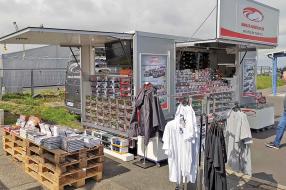 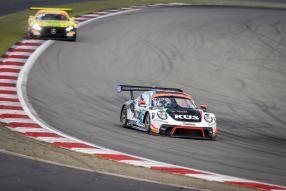 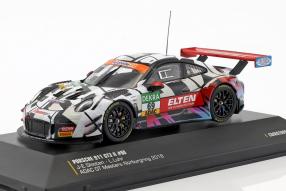 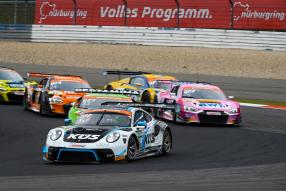 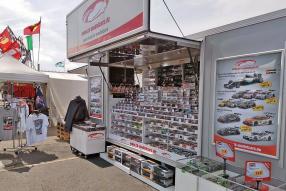 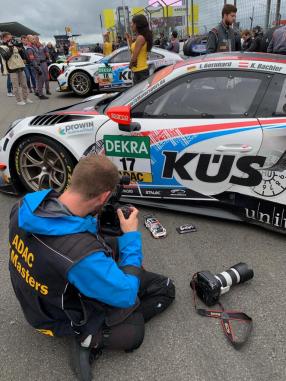 Disillusionment and joy at the same time for the KÜS Team75 Bernhard at the ADAC GT Masters at the Nürburgring: After two free training sessions on Friday with Top-results - amongst other things a best time - on Saturday only one point-result jumped out. Timo Bernhard (38) from Bruchmühlbach-Miesau and Klaus Bachler (28) from Austria came with their Porsche 911 GT3 R to the goal with place 13, the sister car with starting number 18 under Matteo Cairoli (23) from Italy and Adrien de Leener (30) from Belgium achieved the 18th place. On Sunday it was completely different: The No. 17 with the double pairing Bernhard / Bachler won second place in the race from the second row, dominated by the team, while the second Porsche 911 of the team next to it, was eliminated by a slit tire, after an enemy contact with an Audi in the race.

Let's take a look back at Saturday: the morning qualifying session was disappointing. Porsche factory driver Timo Bernhard was stopped by the Red Flag on his first fast lap with the No. 17, in the second attempt a competitor slowed him down. Adrien de Leener also came through the traffic badly, also suffered under the red light and had to go into the race from position 22. Timo was able to make up a position at the start, but further improvements were not made, since there are virtually no overtaking opportunities on the short connection of the Nürburgring. Ex-Porsche-Junior Klaus Bachler was able to hold the position after the driver change and finished in 13th place. The sister car with starting number 18 got off to a good start: Adrien de Leener was able to fight his way to the 17th place until the obligatory pit stop.

Despite hard resistance, Matteo Cairoli lost a position in his stint and ultimately crossed the finish line in 18th place. As a guest starter is not entitled to points in the front field, the No. 17 is ranked 12th, the No. 18 in 17th place. Is this confusion in the interests of the fans? Saturday's result: Pole setters Mirko Bortolotti (29) and Christian Engelhart (32) on the Lamborghini Huracán GT3 Evo of Team Orange1 by GRT Grasser achieved their second win of the season. Luca Stolz (24) and Maro Engel (33) parked the Mercedes-AMG GT3 of Toksport WRT in second place. Also on the podium: the championship leader Patric Niederhauser (27) and Kelvin van der Linde (23) for HCB-Rutronik Racing in the best Audi R8 LMS. Timo Bernhard and team manager Klaus Graf took as comfort that the two Porsche 911 GT3 R remained at least undamaged.

And these started at the Sunday race next to each other and occupied the second start row. The morning qualifying was very positive despite difficult conditions. For a long time, Matteo and Klaus blocked start row one, until two competitors forced their way past the Bernhard-Porsches on a drying track. Matteo started from third on the grid and Klaus from four into the race. Klaus Bachler was able to overtake his team-mate on the opening lap, the places were held at the restart after an early safety car phase and the two Bernhard-Porsche drove in formation flight until the compulsory pit stop. Thanks to perfectly functioning tactics, Timo was in second place after that and defended it despite strong pressure to the finish. In which he dedicated himself to the modelcars of the KÜS Team75 Bernhard, who met for a shoot at the racetrack in the Eifel.

Adrien de Leener tookover from Matteo Cairoli and had to fight in tight traffic with own competitors. In one of those though duels, an Audi touched him on the target straight; while the right rear tire of the Porsche was damaged, the race was over for starting number 18. The drive through penalty was no use. Timo Bernhard to the weekend: "After the Saturday, where there was a lot more going on, this was the right reward today. Second place - the third podium for our starting number 17, I'm really really happy! The Nürburgring has always been good to me from a personal point of vew and has not disappointed me even now. It's a pity for our sister car. Matteo and Adrien did a great job in qualifying and in the race and unfortunately they were pushed out! Too bad!"

The five time winner of the 24 Hours Race at the Nürburgring promised that the team will continue to work on its first win of the season, which it desperately wants to enter this year. And Klaus Bachler was also happy: "Second place today is mega, I'm super happy! We had a good qualifying and then a good start. It was an excellent stop by the team and Timo had a perfect stint. It was a tough race, the pressure was strong, but we did not make a mistake. In second place we scored a lot in an optimal race." The presentation of the modelcars of the Porsche 911 GT3 R from the previous year, was fun for him together with Timo Bernhard, in 1:43 and 1:18 the models found its way to the role model into the pit lane and were also photographed there professionally.

Next weekend: CK at the DTM

Once again Lamborghini got the victory in the Sunday race: Rolf Ineichen (41) and Franck Perera (35) finished first in front of our friends from the KÜS Team75 Bernhard; the third place went to the Audi R8 LMS of HCB-Rutronik Racing with chart leader Patric Niederhauser (27) and Kelvin van der Linde (23). The last two ADAC GT Masters weekends will take place in Hockenheim and Sachsenring in the middle and end of September. Thanks, by the way, to all visitors to our CK trailer, who found their place near the Medical Center. We were very pleased! This weekend of August 24th and 25th, our external team will be at the DTM, at the Lausitzring. There you will find our modelcars and us behind the big grandstand.