With a model car in the trendy large scale 1:12 True Scale Miniaturesr reminist on the 24 Hours of Le Mans in 1983 in pinstripe design 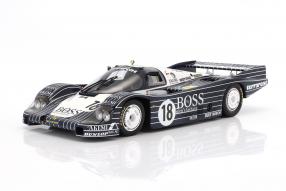 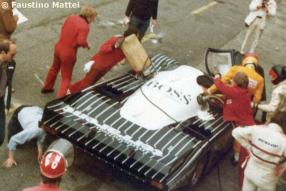 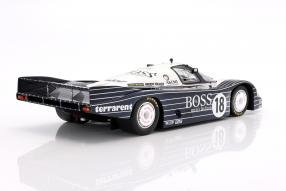 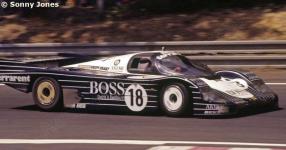 The since Monday new model car of the Porsche 956 in 1:12 scale measured  A whopping 40 centimeters as opposed to a counterpart in the format 1:18, in the miniatures for this successful sports car require only just under 27 inches of space in the showcase. As loyal readers of our blog know, more and more manufacturers from the model car industry are discovering this format, in which the models can stand alone - without being part of a collection, so as the sole eye-catcher in the living room or on the desk. The TSM model cars, limited to 300 pieces, are made of high-quality resin plastic, dispense with functional parts and shine with a harmonious appearance and a multitude of highly visible, crafted details. So now let's take a closer look at the prototype.

In 1982, the international motor sports authority FIA changed the regulations for sports and touring cars and abolished the groups 1 to 6. Sport prototypes should now compete in the Group C, while the high-volume touring cars and the small series GTs had to frolic in the groups A and B. Porsche built the 956C for Group C and thus developed the prototype, which brought all titles of the FIA to Stuttgart from 1982 to 1984, which were to win in the sports car world championship. The winning streak did not abate even with the introduction of the successor 962, which, in consideration of the regulations of the US series IMSA, was slightly reworked 956. 27 pieces of the 956 were built; 90 of the Porsche 962. In the years 1984 to 1991, the concept won 54 races, each powered by a six-cylinder boxer with two turbochargers. In the early days of the 3.0 liters made 455 kW / 620 hp.

The power was passed through manual five-speed gearbox on the rear wheel drive. Our model car replicates chassis 109, with which Axel Plankenhorn, Desire Wilson and Jürgen Lässig competed for Team Obermaier Racing at the 1983 Le Mans 24 Hours. Of the 70 registered vehicles, 51 started in three racing classes; 20 reached the final score. For the 4th race of the sports car world championship 1983 approx. 60,000 spectators came. The racers Vern Schuppan, Hurley Haywood and Al Holbert won the overall victory with the factory-installed Porsche 956 with the number 3 after 370 laps and covered 5,047,934 kilometers.

Our model car is part of a legend

The places 1 to 10 were occupied with the exception of the ninth rank with Porsche 956; a result that Porsche marketed in the US with the advertising campaign "nobody is perfect". The prototype of our model was part of this legendary success, because Obermaier Racing managed to finish the race with the 956 after 347 laps and 24 hours in 7th place. The very big motorsport fans will know that there was another, very special 956, which did not finish the race technically justified: The one with the chassis No. 008, which was piloted by Jochen Mass and Stefan Bellof. This drove in the Rothmans design, while Obermaier was supported by clothing manufacturer Hugo Boss. Racing cars in the legendary pinstripe design enjoy cult status among the fans, so that the magnificently made model of TSM is sure to sell out fast.

Here: Click for Boss Obermaier Porsche 956 in the webshop