iScale received a license as well as an order for the production of a convincing model car. We present the miniature and provide the basic data from the prototype. 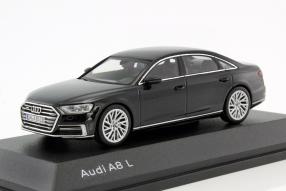 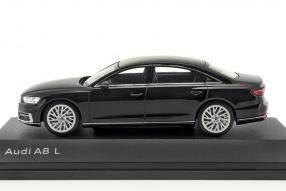 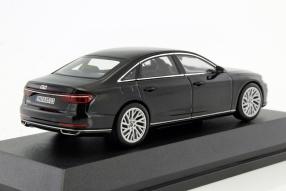 The Audi A8 started as a model series D2 in 1994 and was the successor of the first attempt of the Ingolstadt to take a place in the luxury class, the Audi V8 from 1988. The D5 series was the fourth A8 at the Audi Summit in Barcelona in July this year , to which iScale delivers the first model car. The 1:43 scale miniature is painted in the classic color myth black and perfectly follows the lines of the new A8. The model, made from zinc die-casting, is similar in appearance to the way it can not be bettered. Audi and iScale decided to reduce the long-wheelbase version A8 L, which will make a good start with its optional hybrid drive. The miniature measuring the length 12.33 centimeters debuted as an Audi advertising model under the item number 5011708132 at the IAA 2017.

Audi finds full-bodied words for the new A8: "In the fourth generation, the flagship is once again the benchmark for technological advance - with a new design language, an innovative touch operating concept and a consistent electrification of the drive." Audi also states that the Audi A8 is the first production car in the world to be developed for highly-automated driving. "Starting in 2018, piloted driving functions like Parkpilot, Garagespilot and Staupilot are successively in series," said Audi AG in its press release. From a new design language, we do not really see anything: the radiator grille has become jagged but not more innovative. Except for the exposed mudguards and the luminaire at the rear, we hardly recognize a difference to the predecessor. The typical Audi appearance was maintained, which ensured the residual value of the predecessor A8 / D4.

The basic data for motorization

Click here: The model of the new A8 in the shop