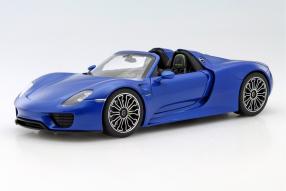 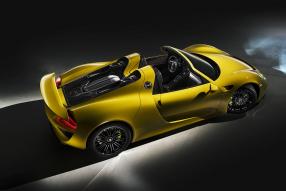 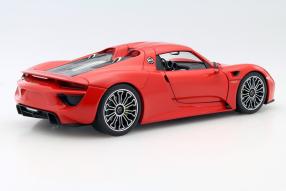 No question - with the models of the Porsche 918 hybrid spyder in the 1:18 scale, Minichamps has delivered a very hard work, which has been very well received by the collectors. Not for nothing are the often limited editions ruckzuck sold out; Despite the quite high price for a standard model which the Aacheners demand from trade and fans. An alternative to this is offered by Welly: the label, in cooperation with the Porsche Museum Stuttgart, has produced three modellautos on the subject of 918 in the 1:18 format, which come to the collector in Indian red, sapphire blue and basalt black. They are in the finish of high quality; The craftsmanship is in no way inferior to that of Minichamps. The miniatures are made of die-cast zinc and offer opening doors. Even if the production of the Porsche limited to 918 copies was discontinued on June 19, 2015, it remains a permanent fire in model construction.

The Porsche 918 from Welly in detail

The look of the modellautos perfectly match the prototype. Especially the lines around the bow apron and the rear section are convincing. The replicas of the light alloy wheels, the brake discs and the brake calipers correspond to good model construction. The gap dimensions of the doors are also pleasantly reserved. The Welly team did a very good job with the interior, which exactly mirrors the cockpit down to the smallest control unit. On the one hand, the faucet panel with the very well-modeled instrument housings is pleasing, but on the other hand also the impression of the center console. The carbon structure of the cockpit is particularly clear in the sill area. The engine cover is also made a dream.

The conclusion: excelent 918 for half the price

All in all, the good performance of Welly is no wonder, because at the end of a cooperation with the Porsche Museum, nothing else can come out as very good. It is nice that this result is also available at around half the price of the Minichamps models . The model of the model car of Porsche and Welly is powered by a V8 engine with 4.6 liters displacement with 450 kW and 608 hp, respectively, based on the 3.4-liter engine of the Porsche RS Spyder. In addition, the vehicle has received electric motors on the front and rear axles, which also provide 210 kW. This electric all-wheel drive with torque vectoring makes it possible to drive purely electrically up to a range of 25 kilometers. The 918 circled in Nürburgring-Nordschleife in a stunning 6:57 minutes.