Equipped with six wheels Mercedes-Benz Super-G was known for its use in the film Jurassic World. The production version appeared now in scale 1:18. 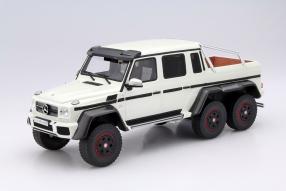 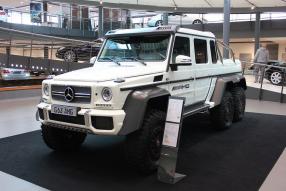 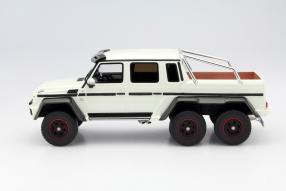 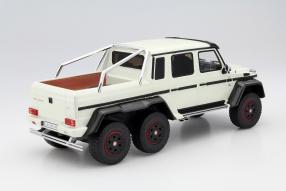 Impressive as it gets: Who ever looks at the Mercedes-Benz G 63 AMG 6x6 can not help but to be impressed. GT Spirit made a white model car 1:18 scale from this, which also makes us wonder. First, because the dimensions of the model car fills up every space in a collector's display cabinet and secondly because the G 63 even more than usual can be seen how well the models by GT Spirit are and how much detail can be made visible. The finish is a sensation: The appearance of the 5,875 meter long original G 63 AMG 6x6 in the form engineers met exactly; the lines of the body agree perfectly. The surface finish of the model produced resine plastic leaves no room for criticism and makes up for that doors and hood are closed.

The key data for the prototype

Looking back, how it ever came to the development of the model: The Australian military inquired of Mercedes-Benz and received 2,000 RHD G classes with as much here in the model featured body. Something what other armies found taste. The chassis is based on the W 461 series, the commercial vehicle version of the G-Class. After the extension and the more facilities around an axis, the front rear axle was a differential in integrated, driven by chain drive, to which the second rear axle is flanged by means of a cardan shaft. The choice on the chassis from the commercial vehicle version was also because the engineers had gained experience from the construction of armored cars for Threatened contemporaries.

The car has a 5.5-liter V8 motor from the house AMG which received an onsite Speedshift 7 G-Tronic automatic transmission. The engine developed from its 5461 cubic centimeters displacement with the aid of two turbochargers 400 kW / 544 hp and 760 Newton meters (Nm) maximum torque. Top speed is put at 160 kilometers per hour. The coachbuilder created with from the C-pillar new pick-up a perfectly harmonious design; two meters in height measures of extremes on impressive tires from Pro-Comp A / T in the format 37 x 12.5 R 18 propelled Benz. To make the sheiks happy who want to ride in the sand race with the G 63 AMG 6x6, the car has a tire pressure system from the Raid Rally Sport.

In the axis portals integrated supply lines to the rim, four 20-liter reservoir for compressed air and a compressor managed: Only with a button the air pressure can be controlled while driving - monitored by pressure gauges. the pressure can be lowered up to 0.2 bar, which results in a lot of floor space for driving through the desert sand. Here help Beadlock rims, whose flanks have a screwed support ring and the turning prevent the tires so that on the rim. Lots of great solutions so the Mercedes G 63 AMG 6x6, which is the most expensive Benz in the price list of Stuttgart with 451,010.00 euros. Friends of our blog know what comes now: With 199,95 Euro, the model is significantly cheaper. We especially love it the honeycomb, which trace the pattern of the model on the seats. Interiors and fittings seem so real that you feel you can start driving. Our conclusion: We are also impressed.