A standard version and a model in Porsche colors appear as special exclusive for modelissimo and ck-model cars in 1:18 scale 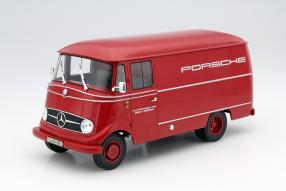 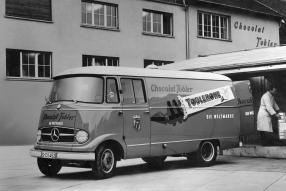 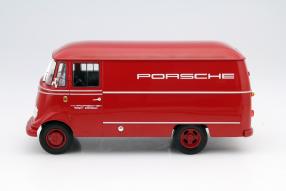 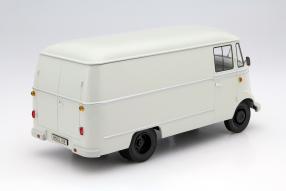 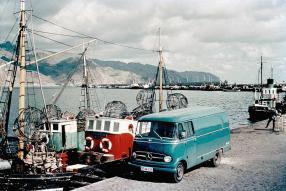 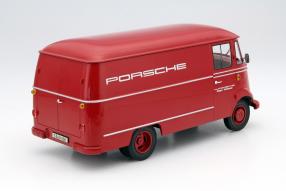 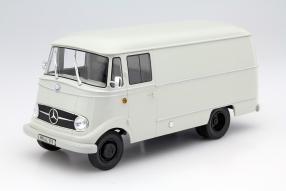 The two dealers from Germany and modellers from France had brought two really beautiful car models on the market: the Mercedes-Benz L 319, bringing the primordial ancestor of all Sprinter and Vito, who helped in postwar Germany, the economy back up to speed , There are engraved precision-made model cars that reach the collector with the gray and red L 319, both of which are only modelissimo and ck-model cars available. In Finish unique, in the build quality top notch. The doors of the van are closed, although zinc diecasting was chosen as the main material of the models. With many details provided, yet robust and as a witness of the highest order, then the L 319 presenting the collector. We look back.

The time of the Mercedes-Benz L 319

The German football champions is Rot-Weiss Essen, the Chancellor takes place in the Mercedes-Benz called "Adenauer": It is the year 1955, which was brought forward by Economics Minister Ludwig Erhard and his so-called social market economy economic miracle requires new means of transport. The answer is, among other Mercedes-Benz L 319. The first Mercedes-Benz van - then "Quick-truck" called - will premiere in September at the IAA. He is the precursor of numerous successful transporter generations of Mercedes-Benz to the current Sprinter, Vito and Vario. After an entire generation of new trucks and new buses, the then Daimler-Benz AG expands its commercial vehicle range.

At 3.6 tonnes gross vehicle weight and compact dimensions, the new L series 319 comes in handy for craft, trade and industry and ventures into lighter weight classes; Claims-nonsense accordingly. The loading space amounts in length to 3.0 meters; the volume of the here selected as a model panel van 8,6 cubic meters. A supporting leadframe for the chassis and racks - the van has a load-bearing structure, leaf-sprung rigid front and rear axles and twin tires on the rear axle and large 16-inch wheels - mean reliable technology. It withstands job even rough treatment, as is customary in circles owners of larger vans. Despite its robust construction, the L 319 has a high payload: It amounts depending on the variant of 1.6 to 1.8 tonnes.

Details of the prototype and model

usually before driving heavy and light trucks in the 1950s as a car hood, so one uses for light commercial vehicles like the space-saving cab-over design. Consequently select the developer for the L 319 an optic which the two almost parallel appearing series LP is similar 315 (the first cab-over trucks from Mercedes-Benz) and the roundish bus O 321 H: The oval grille of the L 319 combines both the large star as a trademark, a as well as the round headlights. Analogously to bus and truck adorns the transporter a band of chrome. It takes place under the windshield across the rounded front end to the side on the doors of the cab: All trim has reduced Norev excellent.

Unlike truck and bus, however, the L 319 has a one-piece, boldly curved panoramic windscreen, whose proportions and appearance Norev has also transferred fantastic fit in the so-called Bburago scale. Despite Cabover construction designers achieve comfortable access behind the front axle. The unusual in spaced well apart forward axis and dynamically issued wheel arches give the appearance of the van, a very independent character, which have transferred the mold maker from Vaulx-en-Vaulin admirably on the thumbnails: in gray basic version to 2,000 pieces, as a red model in the plant color of Porsche limited to only 1,000 units scarce.

Drive technology from the car

Initially a diesel engine from the car 180 D is available, it brings it from 1.8 liters to 31 kW / 43 PS. Soon after the petrol from the 190 supplemented with 1.9 liter displacement and 49 kW / 65 PS program. The vans run up to 95 kilometers per hour (gasoline) or 80 km (Diesel) quickly - robustness counts in this segment then significantly more than speed. If contemporary prospectus yet of a "spirited engine" is mentioned, it tends to favor the optimism and economic optimism this year. The power transmission is made via a four-speed gearbox to the rear axle. The shift lever on the steering wheel is a forerunner of the joystick in the current Sprinter.

Indicators and horn are incidentally operated by a signal ring at the wheel, has also adopted the Norev in a beautiful detail. Ever the interior has been retold in an almost perfect manner and despite all the prototypical and contemporary sparseness entertaining as a Saturday Crime: The linear shape of the dashboard makes its name all honor and was modeled built to the highest of Norev. The instrument panel contains only tachometer and coolant thermometer - more instruments there are not. A fuel gauge is missing, the driver must himself calculate how far the fuel in 60-gallon tank of about 4.8 meters long transporter. Can you imagine something like this today?