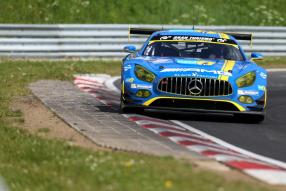 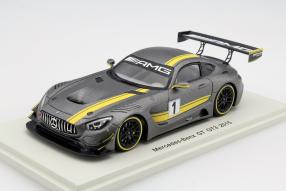 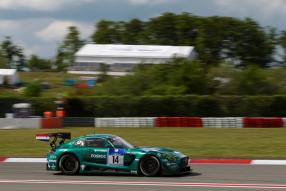 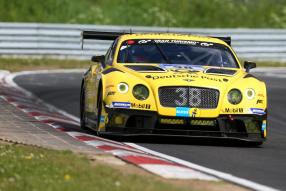 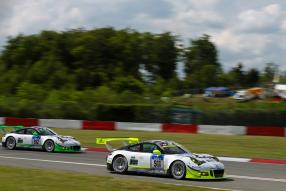 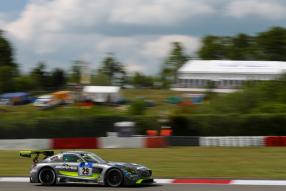 For the first time the new Mercedes-AMG GT3 was at the endurance classic at the Nürburgring at the start - he came, saw and conquered: Mercedes-AMG celebrated after the aborted shortly after launch due to hail and rain weather race at the end of a quadruple triumph , The AMG team Black Falcon with the number 4 and the drivers Bernd Schneider, Maro Engel, Adam Christodoulou and Manuel Metzger triumphed after 3400.65 kilometers with just 5.697 seconds ahead and led after 24 exciting hours a quartet of equal to 4 Mercedes-AMG GT3. In an incredible final sprint Angels overtook only in the last round the hitherto leading Christian Hohenadel the HTP-Mercedes-AMG GT3 with the number 29. Congratulations!

The race is over, the anticipation rises

The 24 hours on the Nürburgring are over. But what remains, what is offered  for the desire of the fans according to the models of the cars used there. The only model that is currently available to us, is held by Spark in 1:43 scale miniature of the Mercedes-AMG GT3 Presentation Car in 2016 or the corresponding output in 1:18 from Norev. Their color scheme in terms of trim found partially on the use of cars. We particularly enjoyed the race cars from Team Black Falcon with start numbers 9 and 14 and no. 29 from the AMG team HTP Motorsport. A real highlight, however - both in the circuit as well as for the showcase - the Bentley Continental GT3; the Bentley from Team Abt with the # 38 in the look of mail seems real cool.

But the fans of Porsche can look forward to the cars from Team Manthey Racing in miniature, the quote with the start numbers 911 and 912 Porsche history, but it has not as good gets in the race. The Audi R8, of course we do not want to forget, but so noble act, like the Mercedes-AMG GT3 with their appearance that does not create the Audi. The Ingolstadt occupied the 8th place as a manufacturer before about 185,000 spectators. With BMW 5th place, Bentley number 7 and Porsche with space 9 made it 3 more manufacturers in the top 10 of the discharged since 1970 endurance classic. Mercedes-AMG secured with the new GT3 therefore the best result since the six-victory of BMW in 1998th

As one of the most beautiful Mercedes-AMG GT3 during the live broadcast on RTL NITRO one of the Haribo Racing Team AMG was named the # 88th But the followers of BMW should look forward to a model car that an insanely high value innovations has: The models of the BMW M6 GT3, the Rowe Racing parked with the number 23 on the 5th place of the final scoring; the output with the number 999 was ranked 12. The Porsche Cayman GT made its debut at the 24 Hours with a 23rd place. He is also expected to dramatically grab the attention of fans of Porsche up. Well, if Spark & ??Co. would only faster: Real bad we you the current Renner not now be able to offer already, but once they arrive you are the first to hear it. Promised!

Thank you for your visit to our trailer, have fun with the above embedded video of the award ceremony and a good start into the new week!