Jacky Ickx and Derek Bell lead the classic sports car from Stuttgart to its first victory in Le Mans: Solido reminds on this with affordable modelcars 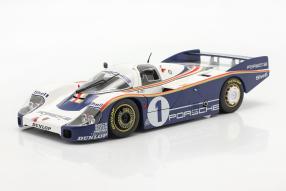 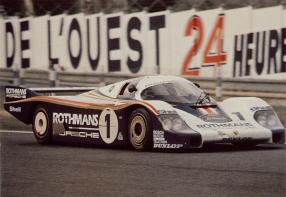 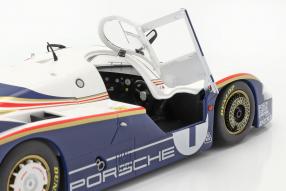 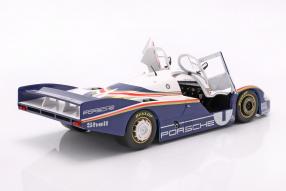 In the age of streaming, fans of film & tv just speak about seasons. Measured by this, the modelcars also fit this usage, because if you look at how many miniatures of the Porsche 956 have already appeared, you have to admit that this offer is almost as excessive as the selection of programs on Netflix. So the editorial staff of this blog agrees the choice of words and ties in with the modles of the Porsche 935/78, which we presented two days ago. Under the item number S1805501, the traditional label Solido presentes affordable models to the Porsche 956 LH at the same time. The miniatures built from diecast replicate the racing car of Jacky Ickx and Derek Bell, with which the drivers competed at the 24 Hours of Le Mans 1982 for the team Rothmans Porsche System and won it after 359 completed laps.

It was a great weekend for the manufacturer from Stuttgart, because it had ended with a triple victory. With the winner car with starting number 1, Solido has chosen a popular role model among the collectors: The models of the Porsche 956 with - in this case - long tail inspires the fans. In contrast to most of the modelcars of this sports car prototype, these miniatures are characterized by one difference: the driver and passenger doors of the latter can be opened and give a strong insight into the cockpit, which is equipped with many details. In accordance with current industry practices, the engine cover remains closed and, so to speak, hides the 455 kW / 620 hp of the six-cylinder boxer engine, which delivers 350 kilometers per hour on the long straight at Le Mans, from the collector. And yet these modelcars set accents!

Nowadays it is kind of rare to have openable doors in scale 1:18. Less with higher priced models of new cars for the street, but way more often with those, which replicate the highlights from the race tracks. The label CMR as well as Shelby Collectibles form glorious guttings, their models offer functional parts. However, who is looking for current Porsche 911 GT3 R's with foldable accesses to interior or engine compartment, will be disappointed. So it is all the more important that Solido is taking another step in this direction with the doors of the Porsche 956 LH; we remember that many years ago Minichamps and Maisto even recreated the engines of prototype sports cars under removable hoods. Especially considering the very low prices of the two Solido innovations, both the Porsche 935/78 1978 and the 956 described here, a strong program for which we would like to see many more new episodes!

Here: Click to the new modelcars of the Porsche 956 LH