In first class workmanship and with many outstanding details come the miniatures of the vintage 1980 in scale 1:18 to the collector 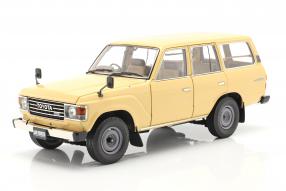 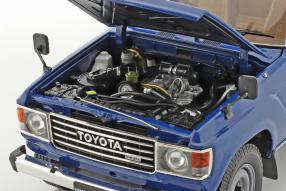 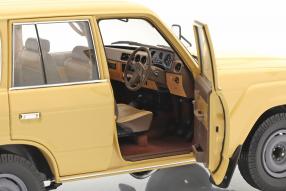 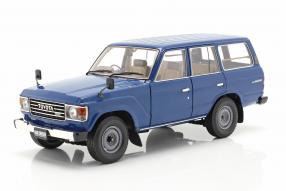 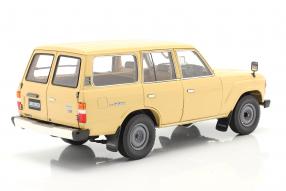 Kyosho lives up to its reputation for building first class modelcars with the now introduced models of the Toyota Land Cruiser of the model series J6. The miniatures in blue and beige as well as in format 1:18 with the item numbers 8956BL as well as 08956BE are built from diecast and offer openable doors and hoods all around. All four entrances to the interior are designed as functional parts; The collector can also move the double-wing tailgate and the bonnet. As is to be expected from Kyosho, the finish of the moving parts goes perfectly with their die-cast zinc environment! The radiator grille, glazing and headlights also nestle in the body of the model. There is only one thing the collector is looking for in vain: the free-standing fenders of the Land Cruiser, but there is a good reason for their lack.

Because with the series J6, Toyota renounced this feature for the first time: free standing fenders were replaced by the voluminous front section which is characteristic for the fifth generation. The significantly more rounded J6 was built from 1980 to 1989 and a total of 406,700 units left the production line. From its predecessor, it took over the chassis, axles and, since the J6, the more comfortably tuned chassis. There is proper space in the interior, which made it possible to use the J6 as a five, six, eight or even ten-seater, depending on the configuration. A look into the interior of the models reveals that Kyosho seems to have opted for the five-seat version. On this occasion: The panels and replicas of the seat cushions are reproduced in two colors, the trunk of the model is lined with high quality.

Kyosho has also used a differend color with the control elements of doors and tailgate. The dashboard are replicated in classic black and brown and have exact decals for the watch collection. The seating surfaces are also well designed. The floor is flocked. Highlight of the model: The replica of the engine compartment! Down to the smallest detail, with prototypical free space behind the grill, support rod for the hood, color-contrasting auxiliary units and liquid container. In addition to the well-known gasoline engines with 4.0 and 4.2 liters displacement, Toyota also built in the diesel with 3.4 and 4.0 liters from the J4; shifted by four-speed and five-speed transmissions. Collectors should shift into the gear as quickly as possible so that they can secure one of these small works of art: Compliments to Kyosho! Have a nice Weekend!

Here: Click to the modelcars of the Toyota Land Cruiser J6