Two nine-elevens in the bellow-version, as Turbo convertible from Norev and as Speedster from KK-Scale in scale 1:18, they match great together in a showcase 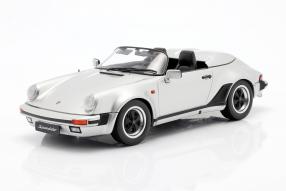 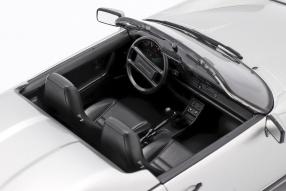 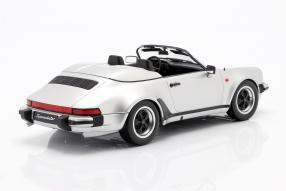 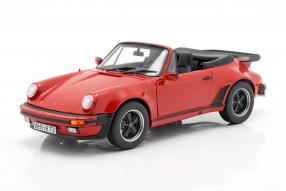 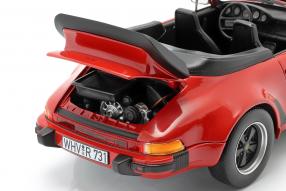 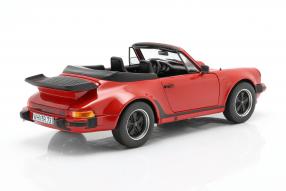 For 16 years, so from mid 1973 to mid 1989, the Porsche 911 left the production line as the so-called G-Model. It's about the second generation of the popular sports car, which, due to the regulations of the US market from model year 1974 on impact of the bumper with an obstacle up to a speed of five miles per hour / eight kilometers per hour, could not result in any damage to the vehicle. The bellows on the bumpers, behind which, in the USA, integrated, elastic impact absorbers were hidden, could be seen on the outside. The rest of the world had to be content with cheaper baffle pipes or just put another check mark in the surcharge list. Norev and KK-Scale are currently bringing two scale 1:18 modelcars with these bumpers: a 1987 Turbo convertible and a 1989 Speedster.

Compared to the original model there were further changes than just massive bumpers: Higher motorized versions received wider fenders to accommodate wider wheels. The G-series also got a longer wheelbase and outwardly new indicators and the continous reflective tape, which integrated the name lettering of the manufacturer from Stuttgart, stood out. A turbo version was not even known from the original 911 from 1964; this era began in 1975 under the company's own series number 930. Norev and KK-Scale did not omit any of the details in the manufacture of their models: indicators, bumpers and the famous Fuchs rims of the 911 are reduced in size. The miniatures of the 930 by Norev appear in inidian red under item number 187664 and have doors and hoods that can be opened.

The models of the Porsche 911 Speedster come in the same color under the number KKDC180451 and limited to 1,500 pieces to the trade; in silver under KKDC180453 as well as under the item number KKDC180452 in an edition of 750 pieces each. These modelcars are also produced from diecast like those from Norev, but they do not offer functional parts. However, a look into the Speedster compensates for this with a wonderfully detailed interior, which offers many details around the dashboard with the classic round instruments. The Speedster was manufactured 2,102 times in this form in the model year 1989. Without a catalytic converter, the 3.2 liter six-cylinder boxer engine in the Speedster developed 170 kW / 231 hp at a maximum torque of 284 Newton meters (Nm). The Turbo developed 221 kW / 300 hp at 430 Nm from 1978 until the end of production.

These Porsche belong together

The company Norev from the French Vaulx-en-Vaulin grants the collectors a look on this powerful drive plant. The models of the Turbo are - as mentioned above - delivered with openable doors, foldable engine hood at the rear and a working trunk lid at the front. The interior offers the same details as the models from KK-Scale, which prompts the editorial staff to write that the models next to each other in the showcase fit together very well. The fact that the Speedster has the fairing with the characteristic humps of the flap above the emergency soft top, which fascinates the 930 Turbo with the large rear spoiler with the integrated intercooler, does not change anything. Conclusion: These two modelcars simply belong next to each other.