iScale received the license for the production of diecast modelcars of the new five-door car of the series 8Y: Advertising models in Audi-packaging in two colors 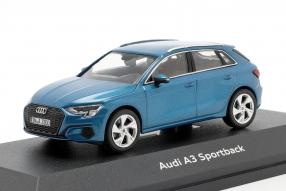 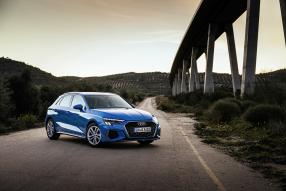 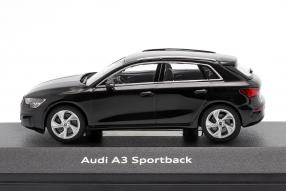 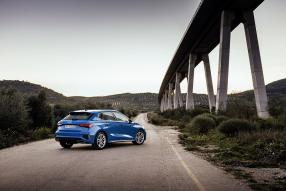 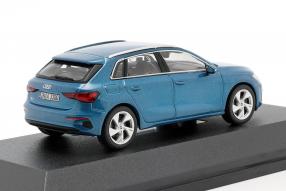 The Audi A3, originally known as the Gucci-Golf, celebrated its premiere almost a quarter century ago in the year 1996 and is now already in its fourth generation on the streets. In addition to head of design Marc Lichte, designer Phillipp Römers was responsible for the design of the new Audi A3 presented in February / March 2020 as a sedan and Sportback and brought out a car that aroused the interest of fans with more contoured lines. As was to be expected, the single frame grill has also been lengthened considerably in this model series. A 35 millimeter longer front overhang makes the new A3 appear more dynamic. iScale has transferred their lines to a scale of 1:43 and solved this task excellently: These miniatures for the new 8V should really not be missing in any collection on the subject of Audi!

The modelcars from diecast are delivered in the typical for Audi, dark grey cartons in the design of the car manufacturer from Ingolstadt with the big printed four rings. The miniatures of the Audi A3 Sportback 2020 appear first under the item number 5011903032 in myth black as well as under 5011903031 in atoll blue. As mentioned at the beginning, iScale transferred the lines in a technically excellent manner to the model: The radiator grille corresponds 100 percent to the design of its role model; the makers from iScale have exactly matched the entire look and feel of the 8V. The serrated headlights, which nestle in the diecast environment in an exemplary manner, are also successful. The roof rails sit on the body as if they were part of a bespoke suit; Glazing and taillights also give no cause for criticism: Also in the model a Gucci Golf.

The rear spoiler that extends from the roof into the tailgate reinforces the dynamics in the model too; the wheel air outlets indicated on the rear bumper serve the same purpose. Whether the Audi A3 or A3 Sportback or the notchback sedan: All 8V are based on the advanced platform called the MQB evo modular transverse matrix. The range of petrol engines extends from a 1.0 liter with 81 kW / 110 hp to a 2.0 liter with 228 kW / 310 hp in the S3. Seven-speed dual clutch transmissions are available for the most powerful versions; The basis is a six-speed manual transmission as standard: the two diesel engines get their 85 kW / 116 hp and 110 kW / 150 hp from just under 2.0 liters of displacement. The cars reach a top speed of at least 204 kilometers per hour; the S3 is limited to 250: The models will certainly find their place with the collectors just as quickly.

Here: Click to the modelcars of the new Audi A3