With a message from the Volkswagen-press department, the modelcars to the VW T4b in scale 1:18 by Schuco move into the focus of our editorial team 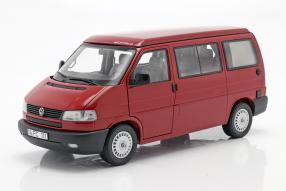 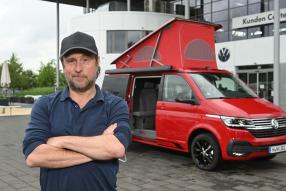 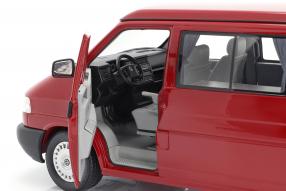 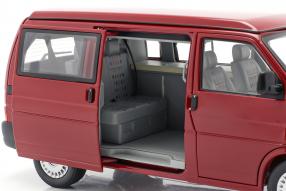 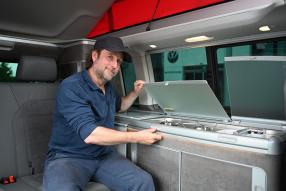 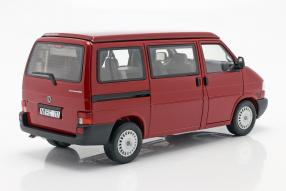 Summertime is camper time and a message from the house of Volkswagen bruoght this well-known fact bacck to our memories: For one of his next projects, director and actor Bjarne Mädel is on the way from the Ostsee (Germany) to the alps and stops at campsites on his tour. The Grimme award winner uses the VW California 6.1, from the Volkswagen Commercial Vehicles VWN, in which he will tour and camp. Quoted Mädel: “I want to be absolutely independent on my journey. Today here tomorrow there. The California fits perfectly. I'm looking forward to the time and the pure Bulli feeling!” Bjarne Mädel took over the vehicle at the VWN customer center in Hanover. On the occasion of this announcement, the campers of the T4b series returned to the focus of our editorial team, which Schuco builds from diecast in scale 1:18.

The modelcars of the Volkswagen VW T4b Westfalia camper appeared in red under item number 450042000. The traditional company from Fürth brought a limited number of pieces of 1,000 units to the trade and equipped the modelcars just as generously as the vehicle of Bjarne Mädel. On Mädel's site of the film database imdb.com a total of 61 productions are listed, in which he participated in front of the camera. Among them audience success as "Stromberg", "Mord mit Aussicht", "Der Tatortreiniger", "Der Überläufer" (all German movies) or the Netflix-series "How to Sell Drugs Online (Fast)", for which the born in Hamburg in 1968 Mädel was honoured with the Grimmepreis and the Bambi (both German awards). At Volkswagen, as mentioned at the beginning, the actor took over a T6.1 California Ocean with automatic transmission DSG and all-wheel drive.

The vehicle is equipped with electric pop-up roof, a kitchen with gas stove, fresh water tank, sink and cooling box as well as numerous cabinet elements, offers sleeping in the rear and under the pop-up roof. Two camping chairs are housed in the tailgate; a removable table in the side door. On the back there is a connection for an outdoor shower. The modelcars of the Volkswagen VW T4b from Schuco take up this topic and take us back to 1990, when the base vehicle of this camper appeared. Schuco has delivered first-class work: the miniatures' appearance fits perfectly and the craftsmanship is just perfect. The functionable roof with the bellows made of fabric is particularly remarkable, so that a generous standing height is also achieved with the model.

The good finish can be also found at the attached door handles; also at supposed little things as the perfect matching replicated head and rear lights from diecast; the latter made of multi-transparent molded plastic. All doors are intended to be opened; that also applies for the tailgate and the big side sliding door. Under the bonnet - the T4 is the first Bulli with a front engine - there is a true-to-scale and excellently detailed retelling of the 2.5 liter TDI engine with corresponding attachments such as cooling water and brake fluid tanks. The Multivan editions of this model also meet the same standard. So there were three pretty good fellows in this article: A mega actor, a great VW T6.1 and a class model T4b.

Click here to the modelcars of the VW T4b in 1:18 by Schuco