The miniatures of resin are reminiscent of a world record vehicle from 1939, which had never driven. We take a look under the aluminum body 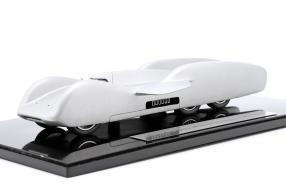 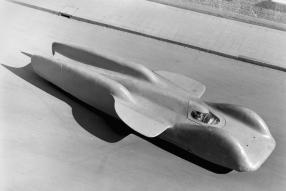 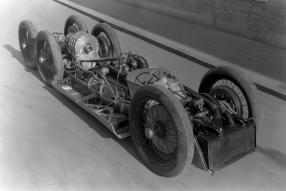 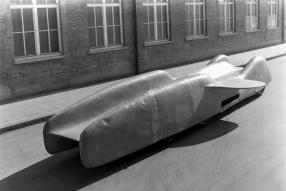 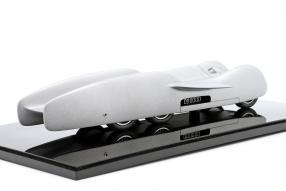 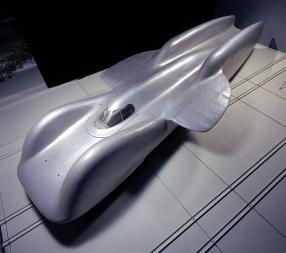 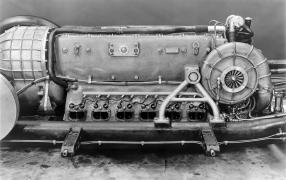 The label Autocraft has released modelcars to the Mercedes-Benz T 80 under the item number B66056162. The construction of this vehicle went back to the racing driver Hans Stuck, who wanted to demonstrate with it that Germany is able to build the fastes cars in the world. Due to the outbreak of World War II, it never happened. To the delight of historians, however, the world record vehicle has been preserved and can be viewed down to the last detail today. And the Type 80 really has a lot to offer in exciting details: Above all, however, the DB 603 aircraft engine. As dainty as the modelcars look in our pictures, their dimensions are also enormous in scale 1:43: after all, the prototype measures 8,240 meters in length; so in the model 19.2 centimeters! An S-Class in the same size is around 11.5 centimeters long. So let's dedicate ourselves to the role model and model.

While the other Mercedes-Benz record cars of the 1930s were created on the basis of successful Grand-Prix racing cars, the T 80 was completely redeveloped. With this vehicle, the company from Stuttgart advances into other dimensions. That applies to the targeted speed as well as the measurement. On behalf of Mercedes-Benz, the Porsche design office designs a vehicle with three axles powered by an aircraft engine. The wheelbases are 3,550 and 1,280 millimeters: what is meant is the distance from the front axle to the front rear axle and between the two rear axles. The engine is installed at the front of the first rear axle. It transfers its power to the two rear axles designed as pendulum axles. The designers dispense with a gearbox because of the high torque.

The hanging installation of the engine corresponds to the position in the aircraft. This allows the vehicle's frontal resistance to be kept as low as possible. With its aerodynamically optimized, narrow streamlined body, the T 80 has a drag coefficient of 0.18. The body paneling weighs exactly 132.5 kilograms, according to Mercedes-Benz data from June 6th, 1940. It is supported by a tubular frame that weighs 124.5 kilograms. The engine weighs 808 kilograms, complete with flywheel. Overall, the T 80 reaches a dry weight of almost 2,900 kilograms without consumables and drivers. This is of considerable importance: the vehicle is less than half the weight of the British record-breaking cars of the time. The receptacles for the side fins not firmly attached to the body are attached to the space frame.

These fins, which Autocraft has just his as perfect in appearance as the overall impression of the T80, are reminiscent of the wings of an aircraft, but have the reverse profile and generate downforce instead of lift. Eight quick-release fasteners connect the entire body to the chassis, which consists of a ladder frame with side rails made of oval tubes. The T 80 already had four pneumatic jacks with a central connection. The front track width is 1,300 millimeters. With 1,320 and 1,180 millimeters, the two rear axles have different track gauges and thus follow the profile of the body, which becomes narrower towards the rear.

So for image reasons, it should have been driven a speed in Germany that no other land vehicles have ever reached before. At this time, British drivers always set new records on North American routes: Malcom Campbell reached 484.62 kilometers per hour with the "Blue Bird" on September 3rd, 1935. George Eyston broke the 500 with the "Thunderbolt" on November 19th, 1937. And John Cobb set a new record on August 23rd, 1939, with the "Railton Special" of 595.04 kilometers per hour. Accordingly, the speed planned for the T 80 moved from 550 to 600 and finally even up to 650 kph. Until then, the world speed record on public roads by Rudolf Caracciola on January 28th, was 432.7 kilometers per hour with the Mercedes-Benz W 125 in 1938.

Here: Click to the modelcars of the Mercedes-Benz T 80