With two completely different concept cars to Ford and Mercedes-Benz, collectors can now add in scale 1:12 to their showcases 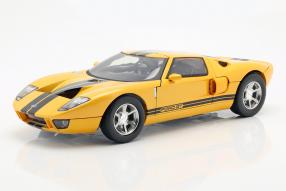 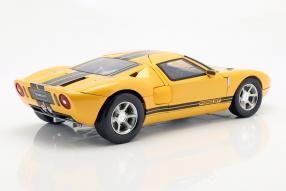 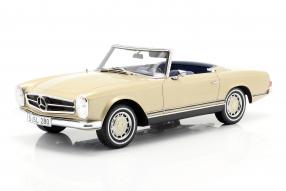 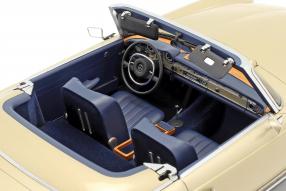 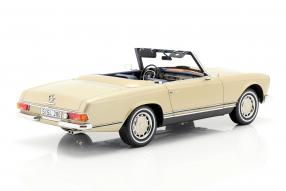 Since Monday, the collector has the option to extend his portfolio by two miniatures, which almost don't deserve this contribution: Premium Classixxs presentated modelcars of the so-called Pagode, the Mercedes-Benz 280 SL of the model series W 113 in the large scale 1:12; a sportcar that was a dream for countless fnas from all over the world in the 1960s and still fascinates fans of sporty cars unitl today. Something similar can be said about the Ford GT concept, which attracted attention in 2004, since it started to revive the legendary times of Ford in Le Mans with the GT40. Motormax presented new modelcars of this vehicle, which are available under the item number 73001 in yellow and black paint; also in 1:12 and thus measures around 39 centimeters in length - mega, right?

Let's stay with the models of the Ford: Motormax chose diecast as the main material and gives the Ford GT concept opening doors, a true-to-original interior as well as a foldable engine cover that allows a look at the finely designed, detailed drive set. By the support of a compressor, the 5.4-liter V8 produced 404 kW / 550 hp with a maximum torque of 774 Newton meters (Nm); managed by a six-speed manual transmission. In 3.9 seconds, the vehicle that was then taken over into the series production, reached 100 km/h; 330 top speed are in it. 101 units were delivered to the European market for EUR 177,000 each; A total of 4,038 GTs left the production lines by 2006. And ultimately, this success resulted in the new edition, the new GT from 2017.

The modelcars, which perfectly match the appearance, have also steerable front wheels and are also available at a sensational price! Completely different in concept, the Mercedes-Benz 280 SL from 1968 takes us to a completely different time under item number PCL40003: Introduced in 1963, the W 113 series interpreted the term of a sports car completely differently 41 years before the GT described above. The two-seater fabric roof convertible was nevertheless a dream car of its time and was produced a total of 48,912 times. With a motorization of 110 kW / 150 hp to 125 kW / 170 hp from six cylinders, the SL was of course not a super sports car, but nevertheless became a legend. What do both modelcars have in common? That they both complement a collection in the format 1:12 in an extraordinary way: The best way is together!