Greenlight delivers with the models of the Fleetwood Series 60 Special 1955 the main character of the movie The Godfather. A look at our category movie cars 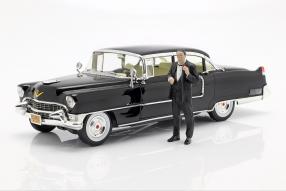 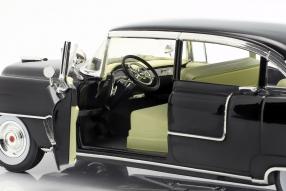 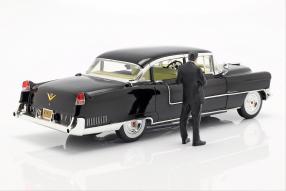 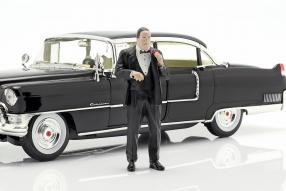 That modelcars have openable doors, is at least then, when they are produced of diecast, no surprise. Rarely does the industry equip miniatures with replicas of the drivers of their role models. This meets the collector currently in the car models of the Cadillac Fleetwood Series 60 Special 1955, which the US label Greenlight delivers in scale 1:18. The miniature, available under item number 13531, is accompanied by a figure of Don Corleone, the title hero of the 1972 feature film "The Godfather", known in German-speaking countries as Der Pate. From our point of view, Greenlight is the brand that is more attentive to vehicles based on models from primarily American movies and series than any other manufacturer. This draws our attention to this Cadillac, but also to our category film cars.

And yes, if the collector clicks on the menu under the title Entire Choice, a world opens up that looks more like the shelves of a video store than an online shop for modelcars. In the section "Movie Cars" we meet Batman and Spiderman, Catwoman and Wonderwoman, Little Miss Sunshine and of course David Hasselhoff in the form of replicas of the Pontiac Firebird, the K.I.T.T. from the unforgotten series "Knight Rider". Models are very strong represented to the cars from "The A-Team"; the television series that told the stories of Hannibal Smith and his troupe in the years 1983-1987. On the other hand, "Entourage" provides insights into the film and television business of our time: this is how Hollywood works; The Hummer H2 from the US series was already presented in the middle of October in the blog under the accessible article via this link.

Brand new in it is the aforementioned Cadillac: For a total of eleven Oscars, the movie "The Godfather" by director Francis Ford Coppola was dominated, whose script Coppola has written together with the author of the novel - Mario Puzo. The main roles in this epic work on the mafia in New York in the 1970s played Marlon Brando and Al Pacino. The figure, which Greenlight adds to the modelcar, is the title hero Don Vito Corleone and thus basically Marlon Brando and corresponds in appearance and look of the famous role model from the then ultimately awarded three Oscars film, which had two sequels. Now click on the link embedded below and immerse yourself in the world of movie cars, the universe of movie cars, where you will meet some good old acquaintances again!