It was a chaotic 24 Hours Race in the ardennes that even was interrupted for several hours. However: place 9 achieved, congratulations 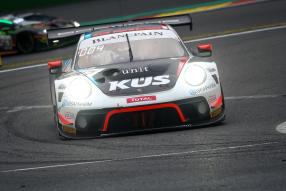 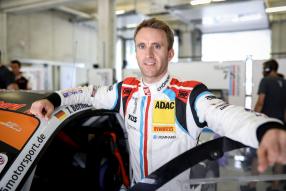 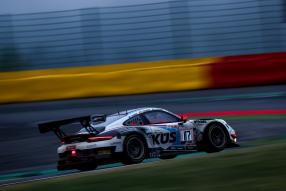 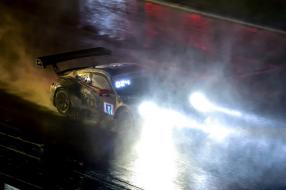 If you read the words of the two-time-endurance world champion Timo Bernhard to the ending of this year's 24 Hours race in Spa-Francorchamps out of the team's press release, you will hear O-tones as "But therefore we don't give up" and "We will not be discouraged", even after realizing that the team has done a solide job - despite flat tires, a chaotic race and at the end place 9. It sounds like an apology after a defeat. And that's, dear team and dear Timo Bernhard, that would be absolutely wrong: You did it, to come as 9th placed through the finish-line out of a field of 72 cars, despite all resistance and forces of nature, which have bothered all involved. From our point of view, you did a fantastic performance and excited us because of your power and willpower! To that: Congratulations - feel hugged and pressed!

Let's come to the details: The KÜS Team75 Bernhard achieved ninth place at the 24 Hours of Spa. After hours of interruption due to heavy rainfall, the race had been interrupted since early in the morning and restarted at 11:30 behind the Safetycar. Starting from 20th, New Zealand's Earl Bamber (28) in the Porsche 911 GT3 R with number 117 on the still-wet track set to catch up, which his Porsche works driver colleague and local hero Laurens Vanthoor (28) continued on a drying track. Around two and a half hours before the end of the Bernhard Porsche was then back in the top ten for the first time. In the end, the ninth place, worthy of some incidents and adverse circumstances, also jumped out. Absolutely great! Let's hear the comment of the Le Mans winner from 2010 and 2017, Timo Bernhard.

"Congratulations to the victorious Porsche teams and their great performances in the double victory. We achieved the finish and showed a good performance throughout the weekend, starting from row one and Laurens also did the fastest race lap. That's a solid performance that we can build on. Unfortunately, small things have repeatedly thrown us back, for example, a drive-through penalty, a flat tire and other things. But such problems can happen in motorsports, we are all there long enough to know that. But therefore we don't give up. The performance was good, even if the result does not quite fit. We will not be discouraged. Thanks to the team for the great preparation as well as to all friends and partners." We as a partner have to thank you for the fighting spirit and for your performance!

The result in short overview

Timo Bernhard has already hinted: Richard Leetz, Michael Christensen and Kévin Estre were the winners of 363 laps on the Porsche 911 GT3 R of the GPX Racing team, followed by Frederic Makowiecki, Patrick Pilet and Nick Tandy on Rowe's nine-eleven. Maro Engel, Yelmer Buurman, Luca Stolz Mercedes-AMG Team BLACK FALCON on the Mercedes-AMG GT3 secured the third podium place; Engel for his performance in the media repeatedly emphasized. Two Porsche in front; For the first time since 2010, Zuffenhausen is again at the top. The Porsche 911 GT3 of KÜS Team75 Bernhard was only one lap behind and was scored with 362 laps. We join the congratulations to all the podium finishers and look forward to the modelcars for the race in 2020.

Here: Click to the preview-article with more details to the team and the track