Only available at CK are the diecast-miniatures of the nine-eleven in scale 1:43, which come from the production of Minichamps: Seperately or or in a strictly limited set 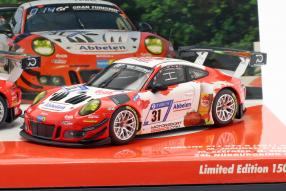 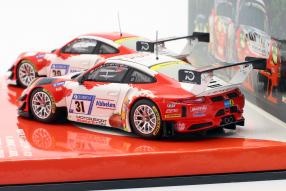 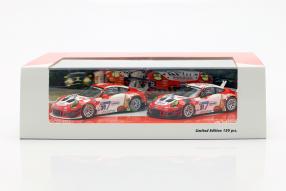 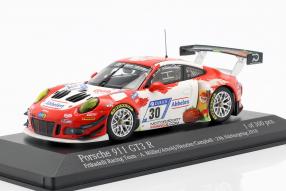 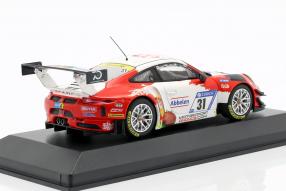 This year's 24 Hours Race at the Nürburgring lies behind us, but the cars and teams, which competed on the Nordschleife last weekend, still deal with us. The Toplabel Minichamps from Aachen has created, exclusively for ck-modelcars, modelcars of the Porsche 911 GT3 R for the fans, which come to the collector seperately or as a set: The miniatures reproduce the race cars of the Frikadelli Racing Team, whose role models with start number 30 and the drivers Lance David Arnold, Alexander Müller, Wolf Henzler and Matt Campbell as well as the No. 31 with Norbert Siedler, Marco Seefried, Felipe Fernandez Laser and Mathieu Jaminet achieved the 11th place at the 46th edition of the race around the Nürburg in the previous year or had to retire after 66 laps. We take a closer look at the modelcars of the year 2018 as well at the team.

If the word Frikadelli is falling, then the first picture that spreads in your head is that of the delicoius meatballs, which are usually called Frikadellen throughout Germany and which are the godparents of the team, which we would like to introduce again with this blog article: Behind the name Frikadelli Racing hides a motorsport team from Germany, which participates in racing since 2005, was founded by Klaus Abbelen and bears the name of a product for whose production Abbelen was responsible. The team advertises on its website with the slogan "The fastest Frikadelle (meatball) of the world". Team founder Klaus Abbelen was executive director of the Abbelen Fleischwaren GmbH from Tönisvorsrt until 2017, which is known for the production of Hamburgers, Schnitzel, Hot Dogs and Doner Kebabs and just Meatballs (Frikadellen) since 1969.

The team is resident in Barweiler, so close to the Nürburgring, Abbelen is a passionate motor sportsman and raced motorcycle races in the superbike class from 1979 to 1986. 1998 he converted to four wheels and became champion in the Ferrari-Porsche-Challenge in 2000 on a Porsche 911 GT2 of the model series 993. In 2005, he entered the Porsche Supercup via the use of a Dodge Viper GTS-R and a Saleen S7-R, completed eight races and then founded Frikadelli-Racing with his partner Sabine Schmitz. Ms. Schmitz's name can be also found in connection with the third model for the Frikadelli Racing Team, which is not yet mentioned, namely the Porsche 911 GT3 R with the starting number 30, which Minichamps leads in the scale 1:43 under the item number 413186790.

It shows the car, with which Klaus Abbelen, Sabine Schmitz and Alexander Müller achieved the 5th place at the VLN 3 race on the Nürburgring 2018; limited to just 200 units, out of diecast and also exclusively available at CK. The fact that the details and the appearance of the model perfectly match these of the role models and that you can not do a miniature better than Minichamps delivers them, should not surprise the fans of the small works of art. The limited set of 150 units comes with its double showcase under the item number 412183031; The limited to 300 pieces miniatures with the start numbers 30 and 31 are also available separately (413186730, 413186731).