With the model of the legendary motorbike in scale 1:12, Minichamps is a perfect reminder to the beginning of a great era 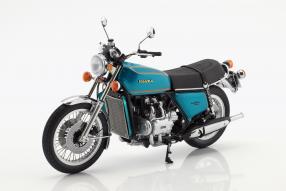 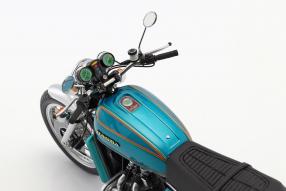 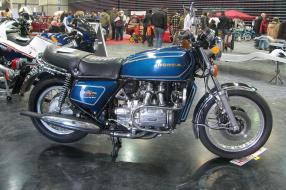 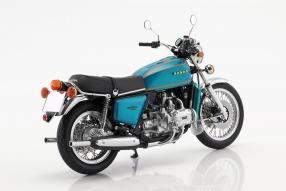 Today, on Tuesday, we want to look beyond the usual edge of the plate not with four-wheel vehicles, but with actually only two wheels: The team from Minichamps has delivered fantastic miniatures in scale 1:12 with the models of the Honda Gold Wing GL 1000 KO, one of the most famous motorbikes til today. The version GL 1000 of the Gold Wing was the first version of this heavy travel and tour motorcycle at all. It came to the market in 1974 and carried the designation KO. The motorbike had not been presented like in Japan, but at the Internationale Fahrrad- and Motorrad-Ausstellung IFMA (International bicycle and motorbike exhibition) in 1996 in Cologne. The Honda Gold Wing GL 1000 was about that, like what a Mercedes-Benz S-Class Coupe was in the car segment. It established an era of motorcycles, which continues with the 2018 GL 1800 until today.

The target group are the motorcyclists, who, like the owners of a large luxury coupe, put value on high performance combined with the highest level of comfort, optimum safety and good protection against bad weather conditions on long journeys. In contrast, weight and purchase price are sizes that do not play a major role for the clientele of the Honda Gold Wing. Minichamps has brought a really outstanding model of the first edition of this impressive large motorcycle with its more than 2.3 meters in total length: As so often with the four-wheeled miniatures here is the spice in detail: the indicators, for example, made of transparent orange plastic or the many spokes in the two wheels. In contrast to the modelcars are less hidden, the total of three brake discs (two front, one behind), which the people from Aachen have modeled examplary.

Headlights and the chrome exterior mirrors, the true-to-scale fittings and the rear shock - that's all top. A true eye-catcher here is the model of the engine, the reduction of the liquid-cooled four-cylinder boxer engine, which delivers 61 kW / 82 hp and 80 Newton-meter (Nm) from its 1.0-liter of capacity and brings the 265-kilogram travel motorbike to a top speed of 210 kilometers per hour. Two overhead, driven by timing belt camshafts controlled the valves via rocker arms. By dispensing with the chain drive till today, reduced noise as well as the maintenance effort. The power transmission to the rear, Honda realized via a shaft drive, which is considered a novelty at Honda. The wheelbase is 1.1 meters!

The tank forgiveness, the dummy tank - in front of the driver's seat it offers, after opening a flap, storage space and a fuel gauge. The actual tank with its 19 liters volume is located in the frame triangle under the seat, which in conjunction with the mounted below the crankshaft five-speed gearbox ensures a low center of gravity. If the machine is filled up, the weight increases by 30 kilograms. The payload is still not tight with another 176 kilos. The approximately 20 centimeters long models of Honda Gold Wing GL 1000 KO are available under the item number 122161600 and are made out of diecast with plastic parts. If you have not discovered the two-wheelers for yourself: The Gold Wing would be a good start.

Click here to the Honda Gold Wing in 1:12 from Minichamps