Spark has made a very special model car in 1:43, to which even a piece from the ground of the tennis court to which it is dedicated has been attached 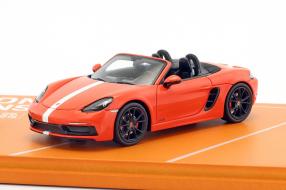 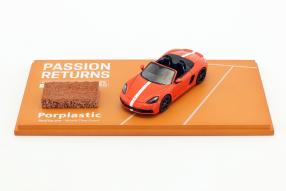 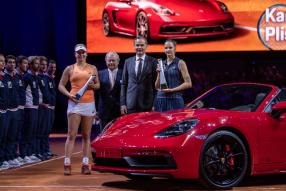 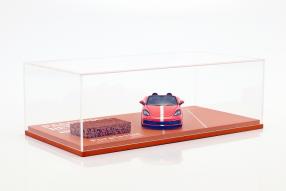 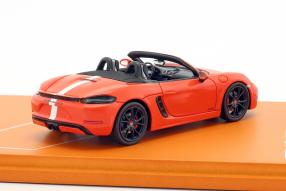 The friends of tennis sports in general and the Porsche Tennis Grand Prix in particular know that the winner of the traditional tournament may go home with a sports car. This year it was a Porsche 718 Boxster GTS, which was announced as the main prize and Karolina Pliskova has acquired: The 26-year-old tennis player from the Czech Republic emerged as the winner of the 41st edition of the prestigious tournament in Stuttgart. Spark brought out a model car for this event, which appears in a small series limited to 300 copies in showcases in which actually two models in 1:43 scale have space. In addition to the model car, Spark has added a piece of the ground of the tennis tournament, which consists of the material Porplastic. The model is parked on an equally orange surface and has a decorative stripe.

This - how could it be otherwise - reminds of the white lines of the sport and is also found on the bottom plate of the showcase. An appealing ensemble that Porsche and Spark have released with the special model and that appeals to the collectors of such event models - see also the one millionth Porsche 911. The quality of the 718 Boxster, painted in lava orange, is great like the other miniatures which we know from Spark of Zuffenhausen prototypes. The attention to detail around the front apron and headlights is good, the interior of the two-seater sports car is slavishly retold correctly. Karolina Pliskova can now enjoy 269 kW / 365 hp, which develops the Boxster from almost 2.5 liters of displacement, but the model cars’ doors and hoods remains closed and thus the engine hidden.

The retractable rear spoiler of the 718 Boxster GTS is on the model. The perforated brake discs draw the attention of the fans as well as the seats and the side panels that emulate the new home of the tennis queen of Stuttgart on the streets. A great model. And a great athlete who does not have a driver's license. But just great tennis plays: In the high-class and exciting final of the Stuttgart traditional tournament of 4,500 fans again sold out Porsche Arena she won 7: 6 (2), 6: 4 against the strong American Coco Vandeweghe. At the end of a busy working week in Stuttgart, Karolina Pliskova and Coco Vandeweghe once again gave their all with the support of the audience.

Review of the final

The balanced first set took the sixth on the world rankings in the tiebreak. After a break to 3: 2 in the second round and a 5-2 lead, it seemed to go completely fast. But Coco Vandeweghe braced herself against the impending defeat, fighting her way back to 4: 5. Karolina Pliskova, whose quarter-final match against French Open champion Jelena Ostapenko on Friday came to an end after midnight, felt No desire, thereafter, for further overtime: With her first match ball after 1:56 hours she made the tenth WTA title of her career perfect: "That was a very intense match and winning this great car is the best motivation, now finally to get my driver's license".

Click: Here for the model car in our shop