04.01.2017Dream Wedding: AutoArt and the Mercedes-Maybach

With a high-class model car of the top version of the S-Class in 1:18 scale, the cooperation partners prove what they can do. 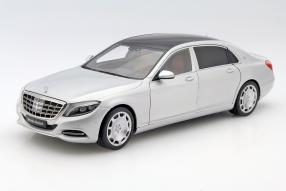 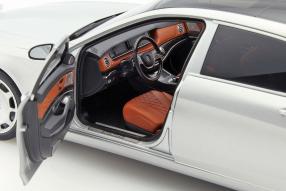 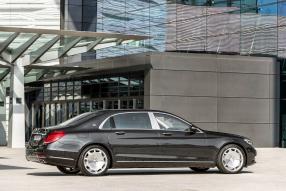 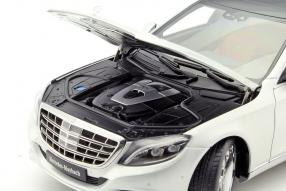 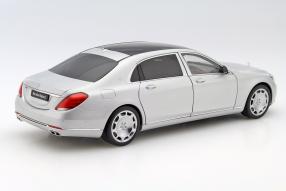 It seems as if Mercedes-Benz has found the best partner for reducing the size of vehicles based on the Maybach submarine. Already in 2002, when the company revived the label with the Maybach 57 and 62, AutoArt made the miniatures. Ten years later, in 2012, the production of the 5.70 and 6.20 meters huge giants ended up lacking demand. Shortly thereafter, Maybach was replaced as a separate brand by the sub-brand Mercedes-Maybach, and presented at the Los Angeles Auto Show 2014 as well as at the same time in southern China, the extended S-Class with a third side window and an almost royal equipment as successor of 57 and 62. AutoArt has also built the modellautos.

The model of the Mercedes-Maybach in detail

The small Mercedes-Maybach S-Class SWB with the internal model designation X 222 is held in the 1:18 scale and runs in the color diamond white bright or - as here - in iridium silver in the showcases of the collectors, which can be opened by an opening bonnet, All-round functioning doors, a folding trunk lid, a detailed engine compartment and a genuine interior design. The mold builders have reduced the relatively independent body of the model and added the third side window; Very beautifully framed by the thick trim, which surround the glazing overall. On the C-pillar, the Maybach logo emblazoned; On the elaborately reduced radiator grille of the Mercedes star. Under the hood dominates a cover; Much more can not be seen from the engine.

The basic data for the model: length runs

The world's most silent series of sedans in the world, according to the Autobauer, offers another 20 centimeters more wheelbase than the long S-Class and is powered by a 390 kW / 530 hp V12 engine. The 6.0 liter develops with the aid of two turbochargers a maximum torque of 830 Newtonmeters (Nm). The 20-inch (50.8-centimeter) forged light-alloy rim, which is exclusively available on the Mercedes-Maybach S-Class, is striking at the model car. Overall, the model of the model is 207 millimeters longer than the S-Class with long wheelbase - of which 200 millimeters are the extension between B- and C-pillar. No detail was omitted in the interior; AutoArt has done a brilliant job of replicating fittings, center console and seats. So what remains but to give the dream team a dreamy grade A+ to the model?