In keeping with the output of the Goodwood Festival of Speed 2016 the Stuttgarter presents a special model, the collapse Hugo Ripert and his team. 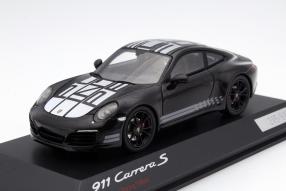 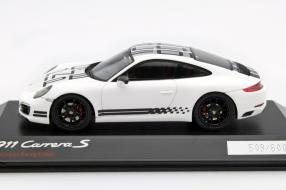 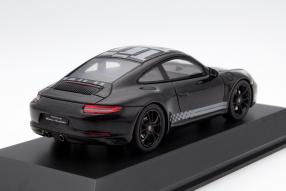 Porsche is a popular brand among drivers who compete in amateur racing and operate with near-standard vehicles in Motorsport. With the special model Porsche 911/991 Carrera S II Endurance Racing Edition Porsche recalls the long tradition that can boast 911 in endurance motorsport. Let's take the 24 hours of Le Mans, which is just behind us: Of the 60 vehicles were seven of the type Porsche 911 RSR. Porsche is currently developing the successor to this customer sport model, which has already completed a successful rollout on the test track in Weissach. Now the phase of testing on selected race tracks across the world begins. The first practical test in Weissach tried Porsche works driver from the car.

"It is certainly unusual, equal to the rollout to let more drivers behind the wheel," says Marco Ujhasi, overall project manager GT factory motorsport, "but since all our works drivers are involved in the development of the new car, everyone who could set it up in time allowed, to Weissach come and turn a few laps. " The first use of the RSR's successor is scheduled for January 2017 in the 24-hour race at Daytona. "The racing debut of a completely new vehicle with a 24-hour race is a major challenge. But we are well on schedule," says Head of Porsche Motorsport Dr. Frank-Steffen Walliser the press. But not only the new race car for the GTE class holds the legacy 911 customer racing alive.

The passion that applies Porsche with the 911 for customer sport, also conveys the new special model Porsche 911/991 II Carrera S Endurance Racing Edition 2016. Inspired by the Le Mans-winning 919 Hybrid wears it a special race car decor and receives inside, among other things, the Sport Chrono package and black tinted instruments. It is powered by a 3.0 liter six-cylinder with 305 kW / 414 hp.

Externally, the vehicle can be identified by the 20-inch Carrera S wheels, the electric sunroof and dual sports exhaust system. The model cars from Spark are painted in black, Guards Red and white and make the details of the model to be used accurately. The advertising models in Porsche packaging was produced in 1:43 scale and each limited to 600 copies worldwide.