Minichamps presented shortly after the premiere of the prototype at the Beijing Motor Show a successful advertising model of vice christened sport coupes. 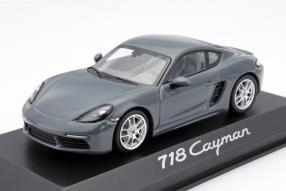 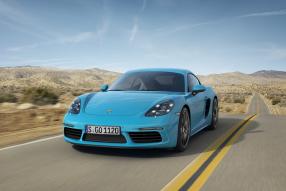 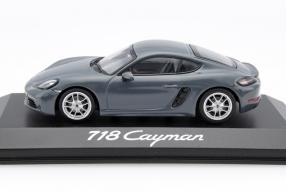 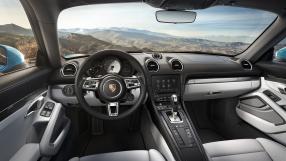 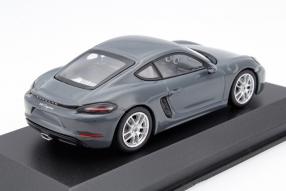 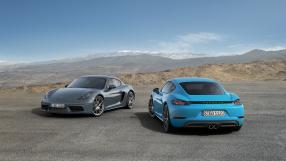 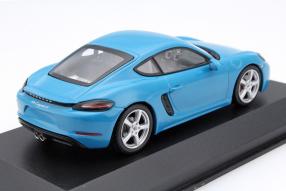 After the debut of the new Porsche 718 Boxster, it is now on the fixed roof variant of this series, to undergo the name change and facelift. But not only a name is changed, as in the model hierarchy assigns the new Porsche 718 Cayman among the Roadster Boxster 718 a. With the same model name, the series thus grows in the name chosen closer together than they it has been technically anyway. Therefore, the end of April is only at the Auto China presented Coupé now cheaper than the Roadster. With the facelift, the closed variant receives the already familiar from the 718 Boxster forth changes to front and rear aprons and the new turbocharged engines. We look at the model and model more closely.

Key data on the new 718 Cayman

Minichamps has the miniatures realized in cooperation with Porsche in 2 colors: In Agate Grey Metallic and Blue in Miami. Both finishes of the model correspond to the colors that were also in the models for advertising shots available and on display at the exhibition in Beijing were. The changes to the front and rear has transferred Minichamps perfectly into the size 1:43 and the appearance of the model thus taken exactly. As always with Minichamps fit headlamp and glazing perfectly; also quite restyled taillights know quality fans convince. The lettering below the rear spoiler and the thorough detailing of the interior with a new switchboard shell round the excellent impression made by the zinc die-cast model, in the upper range.

New engines in the Porsche 718 Cayman

In 718 Cayman the same new four-cylinder boxer engines are turbocharged for use as in the 718 Boxster. The 2.0 engine achieves a torque of up to 380 Newton meters (Nm), that grows by 90 Nm. It is between 1.950 / min and 4500 / min available. The 2.5-liter engine has a turbocharger with variable turbine geometry (VTG) and thus a technology that previously only came on the 911 Turbo used and 718 Cayman S for the first time also has a wastegate when VTG turbocharger. The motor can lift up to 420 Nm (up 50 Nm) in a speed range between 1,900 / min and 4500 / min to the crankshaft. For the driver, this means an even better acceleration in all speed ranges, as Porsche press.

To accelerate the 718 Cayman with PDK and the optional Sports Chrono Package in just 4.7 seconds from 0 to 100 kilometers per hour. The 718 Cayman S manages this sprint in 4.2 seconds. Top speed of 718 Cayman reaches 275 hours kilometers, the 718 Cayman S 285 kilometers per hour. The now already fourth generation of the Cayman series follows the dynamics of the track of the classic 718. The historic mid-engine sports car won in the 1950s and 1960s with its superior maneuverability numerous races like the Targa Florio and Le Mans. In newly tuned suspension of 718 Cayman transverse rigidity and wheel control are improved, adapted springs and stabilizer bars and stiffer shock absorbers tuned the new.

A direct 10 percent designed steering increases from the manufacturer's perspective, the agility and driving pleasure. Customization options offer the Sport Chrono package and Porsche Torque Vectoring (PTV). As another option, the PASM is 10 millimeters lower the body for the selection, for the S model beyond the first time a PASM sports suspension with 20 mm lowering. The Sport Chrono Package is now - as with the other Porsche sports cars - adjustable via the program switch on the steering wheel. Among the 3 previous settings Sport and Normal and Sport Plus is added the program Individual, with which the driver can call up previously saved custom settings of various systems.

Adapted to higher performance delay enhanced brakes with brake discs in the dimensions 330 mm front and 299 millimeters at the rear. The 718 Cayman now has the braking system that was previously used in the Cayman S. The 718 Cayman S gets the other hand on the front axle, the four-piston calipers of the 911 Carrera with 6 millimeters thicker brake discs and can therefore stronger pack than previously. We find that Porsche has operated much care in detail the 718 Cayman and this is the car really well. The model car is also at a premium level road, has named accordingly a high-quality finish and we therefore considered by us to note 1. A good start for the new no. 718, right?