There is one in the accessory program of the Stuttgart carmaker; now Norev is pushing a high-class car model of the S-Class from model year 1997 in 1:18. 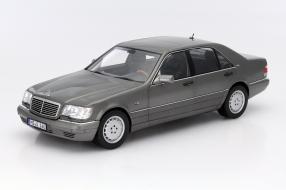 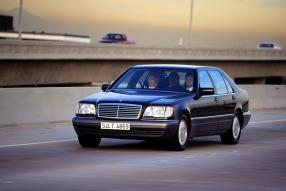 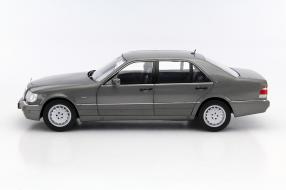 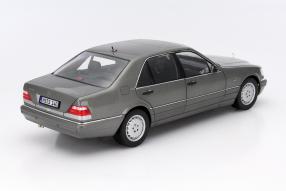 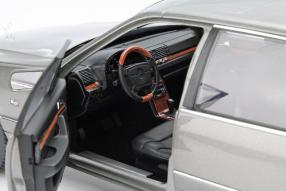 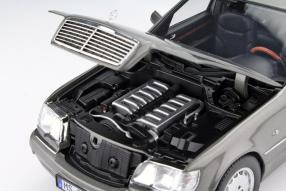 This year Mercedes-Benz has a lot to celebrate: Business is as good as ever. While Volkswagen AG have to let their sponsoring contracts with several Bundesliga clubs expire given the diesel scandal, Mercedes-Benz is also operated in 2016 as Automotive Sponsor of the Mille Miglia in Italy. Another highlight for the Stuttgart carmaker but is the 25th anniversary of the internal designation W 140 called S-class. Yeah, time flies. We can still remember the nagging that the car was too wide for the car trains or for parking and the abuses from across the two dipsticks that out drove from the rear fenders, when the driver has engaged reverse gear. But today we know: The W 140 was simply a fantastic car.

In the latest catalog of shops of the Mercedes-Benz W 140 - there introduced as an advertising model in the market - no longer listed by Norev in 1:18 scale. But the French model car made of diecast now bring to the specialized trade program, but exclusively limited for ck-model cars and modelissimo and only 1,000 pieces. How otherwise used by the ladies and gentlemen from Vaulx-en-Vaulin is the model car of high quality. The quality of workmanship presented top. Doors and hoods are open and allow a view of the miniature permanent durable technology free, for as the series W 201, W 124 or R 129 are the W 140 designed for eternity. In used car handel copies are available at EUR 5,000, which offer themselves as an alternative for the purchase of expensive middle-class cars such as the Golf VII.

The S-Class 140 series celebrated at the Geneva Motor Show and Accessories of 1991, Premiere and sat on maximum comfort by generous dimensions as well as double glazing for optimized acoustic insulation. There were also numerous systems that support the driver. It is also the first production car of the brand, which was available with a twelve-cylinder engine. The W 140 series to be also in the service of a future that is present today: a technology platform proven already in the 1990s, autonomous driving. ". With the new S-Class Mercedes demonstrates again claim to have invented the car and to build the best car in the world applied to the 400 SEL, one is forced to admit. The claim is fully justified"

The size of the W 140 polarized

That was in 1991 to read in the journal "mot" in the section  for new releases. Thus, the magazine brought a widespread assessment to the point. In this S-Class stuck - again - the entire corporate knowledge around the automobile, as it can only be for an inventor. In its home market Germany, however, showed at the beginning and irritation in view of the size and presence of the sedan. Clearly the extent especially in comparison to the direct predecessor, the Series W 126. Other markets love the new S-Class just because - finally used a vehicle of the upper class often of representation. But the criticism is 25 years after the launch of the W 140 long forgotten. Today the car is a sought classic vehicles.

Our model: The facelift

Unfortunately, many of the well-maintained luxury sedans went to the turn in the countries of the former Eastern Bloc. A technology highlight was then the newly developed 6.0 liter V12 engine of the 600 SE / SEL 600: With a nominal output of 300 kW / 408 hp they were at that time the most powerful car of the brand. A facelift on the bumpers, side panels, and the rear lights brought a subtle stylistic revision 3 years after premiere. The new version was presented at the Geneva Motor Show in March 1994 and now bears the "S" now placed in front of the number of liters - exactly this combination of facelift, a new name and the V12 forms the basis or the model for our model car, which in the appearance precisely matches the design of the prototype. Total left, so the end of our retrospection, 406 717 W 140 conveyors in Sindelfingen.