Kimi Räikkönen, who competed his last race in the premier class in Abu Dhabi 2021. 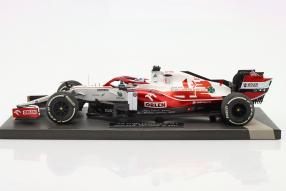 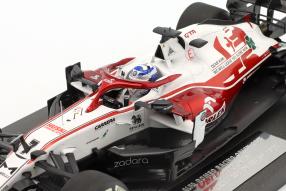 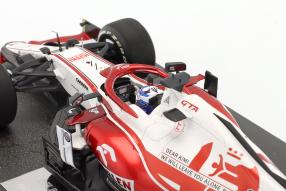 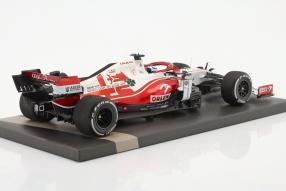 Kimi Raikkonen is a proper veteran in the Formula 1. Except for the years 2010 and 2011, when Räikkönen paused in the premier class, he was part of the regular cast for a good 20 years (from 2001-2021). In addition to his sporting successes, he is known for his calm, cool-looking manner. The tattoo of the same name on his left forearm shows that he more than accepted this characteristic and the resulting name "Iceman". The name Iceman also adorns his helmet. Minichamps dedicated a model in scale1:18 to Raikkonen's last appearance in Formula 1. It is the Alfa Romeo Racing C41 with which the "Iceman" contested his last race in Abu Dhabi on December 12th, 2021. The model is limited to just 980 pieces and reproduces the original in the high quality you are used to from Minichamps. In addition to many other details of the Alfa, the cockpit of the Formula 1-car is also reproduced true to the original. Minichamps also modeled the protagonists of today's article. And so Räikkönen sits true to scale as a driver figure in the model. For Formula 1-fans, the Minichamps model is the chance to make the memory of a 20-year Formula 1 career tangible at home.

Like most racing drivers, Kimi Raikkonen's career started in karting. Räikkönen's commitment there, which began at the age of 9, was to last for 10 years (1988-1998). After only one year in Formula Renault, in which Räikkönen regularly dominated the races, Peter Sauber's Formula 1 team took notice of him. After a few test drives, the then very young Finn was signed up for the 2001 Formula 1-season. In addition to heavy criticism of Sauber's willingness to take risks, even the FIA initially only granted Räikkönen the super license for four trial races. At the end of the season, Räikkönen was in tenth place with a total of nine points. Another Finn, who retired in the same year, directly recommended Raikkonen as his successor. We're talking about Mika Häkkinen, who made McLaren sign Raikkonen. What follows is a 20-year career in the pinnacle of motorsport. After four years at McLaren (2002-2006), two years at Ferrari (2007-2009) followed, during which Raikkonen achieved the 2007 Formula 1-title and an award for the most fastest laps in a season. Before the cool Finn celebrated his Formula 1 comeback at Lotus in 2012-2013, he allowed himself a two-year break in the Formula 1 circus, but not from motorsport in general. From 2010-2011 Raikkonen competed in the World Rally Championship and was also successful there. After the aforementioned engagement at Lotus, he returned to Ferrari in 2014-2018 before the Iceman was signed to Alfa Romeo from 2019 until the end of his Formula 1-career.

Unfortunately, his last race in Abu Dhabi came to a bitter end when Raikkonen had to park his Alfa Romeo due to a brake problem. In general, the Finn's 349th start was more unpleasant for him than for his joy. The many handshakes from fellow drivers, the pat on the back, the good wishes from all sides, the ceremony organized especially for him by Formula 1 before the start of the race and the reception that his former employer Ferrari gave him were too much trouble for the Iceman about one's own person. Even if he told the press at first that he wasn't a fan of all this effort, you could see a certain emotion in him later. The end of Kimi Raikkonen's Formula 1-career is definitely not the end of his racing career. So we can certainly continue to look forward to the Iceman. The Finn started in the NASCAR Cup Series in 2022 and made his debut there. 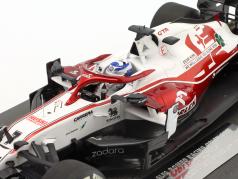 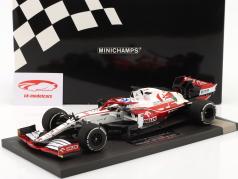