Quick as a flash: The Formula 1 car of Lewis Hamilton now again in 1:43 scale in a limited edition. Hip: A 9 hours young season review. 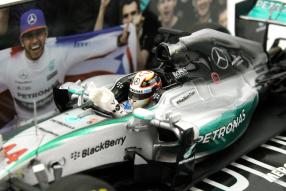 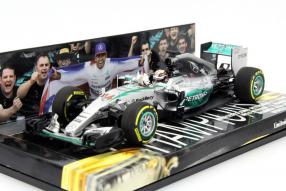 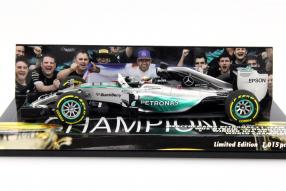 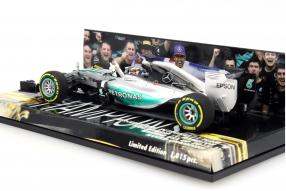 he Briton Lewis Hamilton secured the victory at the US Grand Prix already 3 races before the end of the season ahead of his second world title with a Silver Arrow: The Mercedes-AMG F1 W06 hybrid he did it "won more time", which can be read on the engine cover of the finished resine plastic model in 1:43 scale. The racer, born in Stevenage on 07 January 1985, belongs to the circle of triple champions. Minichamps has the occasion of its profits to the F1 World Championship 2015, limited to 1,015 pieces Traders edition of the car model launched, which is available under the article number 417 150 444 for 74,95 Euro. As usual, the Aachener have delivered a clean work around the team of Paul G. Lang and Romy; lightning fast, in less than 6 weeks after the race. The proportions and appearance of the drawn design boss Aldo Costa racecar vote yet perfect.


Regarding the reduction of spoilers, splitters and chassis parts Minichamps has again transferred every detail knowledgeable on the thumbnail. Even looking at the front spoiler with the numerous air guide elements reveals the high, formenbauerischen effort and the close cooperation between modellers and team, because without support from the company's own computers of Mercedes-AMG could Minichamps not as good work. Cockpit, side pods, the filigree and multicolored running front and rear suspensions, the replicas of the rim and the fragile antennas on the front testify to craft the highest quality. The specialists from Minichamps have already shown the recently published model in 1:18 scale, which introduces the store of CK-modelcars link embedded here.

The statistics for F1 W06

The prototype, incidentally completed 19 launches, took 16 wins, 703 championship points, 18 pole positions and 13 fastest laps, 33 podiums and 936 laps over 4705.9 kilometers. Hamilton has since 2007 driver in Formula 1, went up since 2012 for McLaren at the start and was with the team from Woking immediately vice world champion. The following year - 2008 - he became the youngest at that time world champion in the history of Formula 1. Since 2013, the Englishman for Mercedes AMG Petronas F1 drives. The team duel against his colleague Nico Rosberg went 2014 and 2015 for Hamilton well: He was world champion. Minichamps celebrate the recent success with a great model car that is not only ideally suited as a last minute gift with which meets the donor to the heart of fans of the brand or of Hamilton.

Note the video above: At the time of publication of this paper only nine hours of young, cutting-edge season review of Mercedes-AMG Petronas F1. Have fun!