07.12.2022Senna's World Champion-McLaren: Two models of the greatest ever 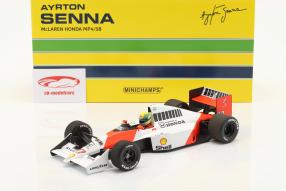 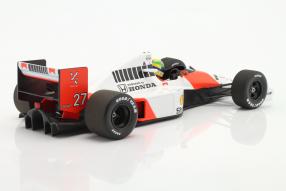 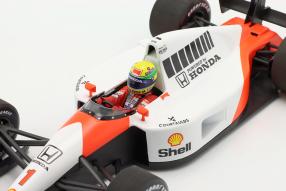 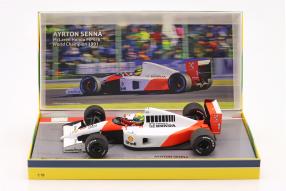 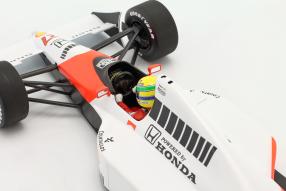 But still for many, the Brazilian is the greatest of all time, not least among drivers. The three-time world champion who died in an accident in Imola in 1994 is the best example that it is not just successes, numbers and statistics that make a racing driver a legend. Regardless of his great successes, Ayrton Senna is unforgotten because of his driving style, his personality and his charisma. Modelcar lovers also help ensure that the legend lives on. Minichamps released Senna's 1990 and 1991 World Champion McLaren in scale 1:18 and in limited numbers.

Ayrton Senna already became world champion in 1988. After the change from Lotus, Senna defeated his teammate Alain Prost immediately in his first year at McLaren. The bitter rivalry between the two would shape the following years in the premier class.

In 1989, Prost and Senna collided at the World Championship decision in Suzuka. The title went to Frenchman Prost, who switched to Ferrari for the 1990 season and brought the number 1 car for the world champion with him to Maranello. McLaren, on the other hand, turned out with the numbers 27 and 28 - i.e. with those that were usually emblazoned on the Ferrari.

In 1990, the close exchange of blows continued throughout the season. Ironically, in Suzuka, there was another scandal. After the start, Senna shot his rival as he entered the first corner, taking Prost out of the race and giving him the chance to make up points. Senna was world champion. The Brazilian later admitted he caused the collision on purpose.

The following year, Ayrton Senna faced a new opponent in the title fight: Nigel Mansell, who was chasing his first World Cup success with Williams. Alain Prost, on the other hand, experienced a disappointing season with Ferrari without a single win, which ended in dispute and separation. The World Championship decision in favor of Senna was again made in Suzuka when Mansell dropped out and the third and last title for Senna was clear.

Six victories were achieved by Ayrton Senna in 1990. In 1991 there were seven triumphs – mind you, out of 16 races that the calendar included at the time. But Senna didn't just shine on Sunday. His pole position laps were particularly spectacular, with which Senna captivated the Grand Prix scene on Saturdays. In the 32 races in both seasons, he started 18 times from the best grid position.

The two models stand motionless in the display case, but in your mind's eye you can often see them pushed to the limit - as we were used to from Senna and the distinctive, red and white McLaren when he was alive. The Honda logo, which supplied the infernal twelve-cylinder engine at the time, is also clearly visible. And then, of course, there's the Ayrton Senna driver figure with his distinctive helmet design.

The Minichamps models in scale of1:18 are reproduced true to the original and are limited to 333 pieces each exclusively for ck-modelcars. They are delivered in a high-quality collector's folding box.

[06.12.2022] A touring car from the time when television newspapers still acted as sponsors in racing 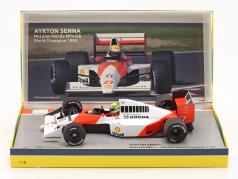 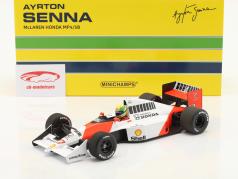 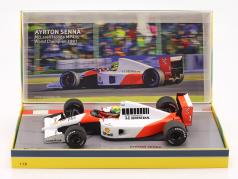 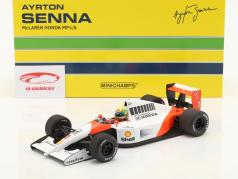