11.11.2022A classic with a lot of power, which was the fastest series-produced sports car in Germany at the time

It's about the limited edition of a Porsche 911 Turbo in scale 1:18 by label Norev. 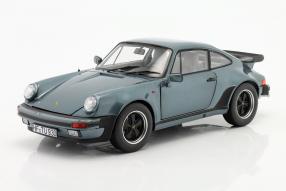 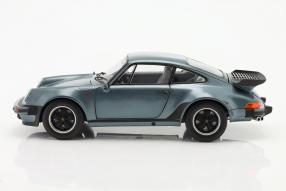 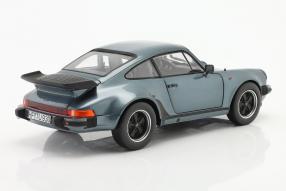 In a 1984 test, the magazine Auto, Motor, Sport attested the Porsche 911 (930) a beautiful cockpit and an unmistakble engine sound that is a pleasure for the ears, which is considered a revision of the G model. One can still attribute these attributes to the 930, one of the most popular classic Porsche models, with a clear conscience. In today's blog post, we're going to focus on the top model 911 Turbo 3.3 from 1988. Norev has released the classic Porsche 1:18 in blue-grey metallic. The label has reproduced both the interior of the Porsche and the engine compartment, true to the original and in detail. The hood, doors and trunk of the model can be opened. If you want to put the 911 Turbo 3.3 from Norev in your showcase, you should be quick. The reason is that this is a limited edition of 1000 pieces.

The G-model of the 911 (model years 1973-1989) is the first major facelift of the 911. The so-called (Ur-Modell) "original model" was sent into well-deserved retirement and replaced by the G-model. When the Porsche 911 (930) came onto the market in the early 1970s, the time was characterized by the desire for more safety, comfort and environmental compatibility. For example, the bumper of the 911, which seemed very strong by the standards of the time, had to withstand an impact at up to 8 kph without becoming permanently deformed. To this day, the higher bumper with the black plastic bellows is a feature of this 911 generation. Headrests were introduced in the 911, as were seat belts with automatic retractors. The front indicator lights were moved from the fender to the bumper and at the rear a continuous red reflective strip with the inscription "Porsche" was emblazoned between the taillights. Since a total of almost 76,000 models rolled off the assembly line during the production period (almost half as coupes, a quarter as convertibles and a quarter as Targas), the Porsche 930 is still available today and at affordable prices, if you don't necessarily have to buy the version with the charming addition "Turbo". Due to the many further developments compared to its predecessor, the 911 (930) is a classic that is suitable for everyday use and is still offering a lot of driving fun nowadays. Although the engine is basically still the original design of the first 911, Porsche was able to install a very durable and reliable unit thanks to many detailed improvements.

At its introduction, the Porsche 930 was the fastest series sports car in Germany. This is with a reason. Porsche originally planned a Group 4 car for the World Sportscar Championship. The idea was to send the lightweight version of a Porsche 911 into the race. However, after the FIA changed the regulations and increased the minimum weight of the registered vehicles, Porsche stopped development. Porsche used the knowledge gained from this to develop the 930. The aim was to stand up to the competitors from Lamborghini and Ferrari. The Porsche 930 was therefore the top model from Porsche when it appeared. 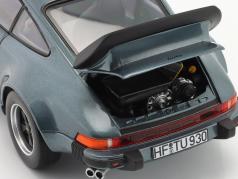 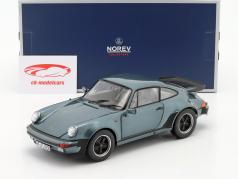