Solido presents the turbo-charged Renault 21 in two colors in scale 1:18. 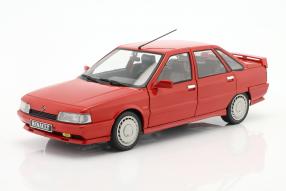 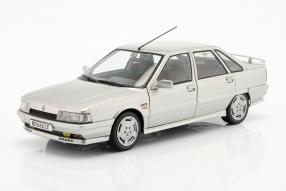 Those who could call a Mercedes-Benz 500 SE their own at the end of the 80s, could be self-reliant. The vehicle that we are presenting today in our blog could easily keep up with this 500 SE on the Autobahn, even if you couldn't guess it at first glance. It was the inscription "Turbo" that caused a lot more attention in the 80s than it does today. This is also the case with the Renault 21 Turbo. Solido is presenting the turbo limousine from the French car manufacturer in the MK I version in red and in the successor version MK II in silver on a scale of 1:18. In addition to doors that can be opened, the models have steerable front wheels. With the doors open, you have a clear view of the interior and the red speedometer digits typical of Renault turbo models made by Solido. The three-spoke leather steering wheel, which made it clear to the experienced observer that it was a turbo just by looking through the window, is also built to scale on the spot. The shape of the Renault 21 Turbo is angular and linear - just as you would imagine a family sedan from the 80s. In today's streetscape with the huge SUVs and rather round vehicle shapes, the Frenchman is definitely an eye-catcher.

The Renault 21 was built from 1986 to 1994 and belonged to the middle class vehicles of the French car manufacturer. The turbo-version of the Renault 21 was built from 1987-1993 and was the absolute top-model of the R21. If you wanted a Renault 21 Turbo, you had to pay twice as much as the basic version for a steep price of 40,000 DM (old German currency). What the customer gets in return is a car that can rotate at under 3000 rpm. drives relatively inconspicuously. At this speed, the turbo lag ends and the boost pressure indicator on the dashboard begins to move, unleashing the power of the exhaust gas turbocharger. In the lower gears, it is now time to hold the steering wheel firmly with both hands to counteract the breakout of the 195 series tires, which are less able to cope with the performance punch. However, once you have exceeded the 80 kph limit and engaged a higher gear, you experience the Renault's rather dead-straight propulsion.

The engine of the Renault 21 Turbo is a turbo-charged two liter four-cylinder, which powers the weight of 1230 kg with its 175 hp and reaches a top speed of about 230 kph. The family saloon completes the sprint from zero to 100 kph in 8.2 seconds. The maintenance is not really cheap with an average consumption of 18 liters per 100 km. However, this parameter was not the measure of all things in the 1980s anyway. Later there was a version with all-wheel drive. Due to the higher weight and the now standard catalytic converter, which steals around 13 hp from the Renault 21 Turbo, the driving performance is weaker than that of the front-wheel drive model. 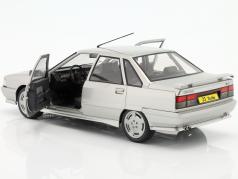 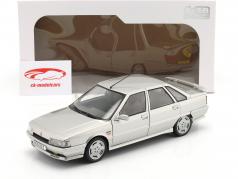 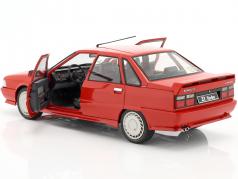 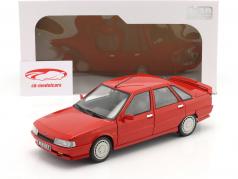